Celebrating 50 Years of Doraemon with Takashi Murakami. For his 13th solo exhibition, the Japanese contemporary artist compiled his latest Doraemon pieces in his first-ever showcase at Perrotin Tokyo.

Art is in everything — even in emptiness. The word “superflat” refers to the various flattened seen in Japanese graphic art, animation, pop culture, and fine arts, and the shallow, vacant hollows of Japanese consumer culture. This “flat” concept is further expanded into a broader sense where it can suggest how the gap between subculture and popular culture is, in essence, meaningless. Instead, this gap should be filled by equality in expression; in the sense that, regardless of where and what the artworks are, they should be of equal value. As a postmodern art movement, it involves the likes of Yoshitomo Nara, Chiho Aoshima, and none other than the contemporary artist who coined the term “superflat”, Takashi Murakami. 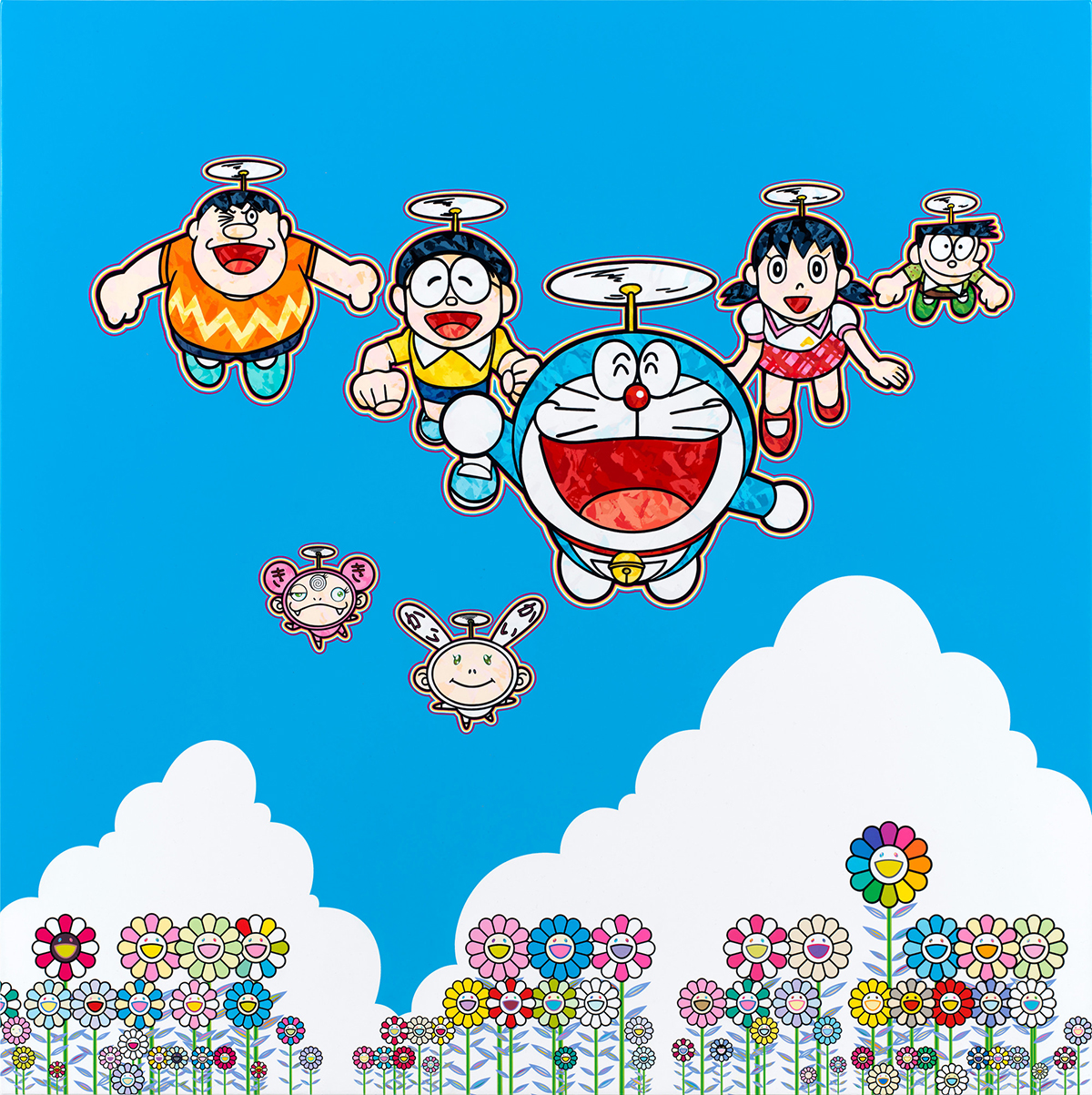 Known for his diverse portfolio of work in fine arts as well as commercial media, i.e. “high arts” and “low arts”, Murakami’s work, as described by Canadian sociologist Sarah Thornton, “bears witness to his many years as an otaku science-fiction geek and obsessive manga fan”, to which the artist explained: “we define subculture as a cool culture from abroad, but otaku is an uncool indigenous culture. My mentality came from those animation geeks”. Otaku culture is not the single driving force behind Murakami’s works, though, as his creations are reminiscent of the styles and works of the “eccentric” painters during the Edo period — which occurred from the 1600s to the 1800s — such as Ito Jakuchu and Soga Shohaku, as well as Rinpa artists like Tawaraya Sotatsu and Ogata Korin. 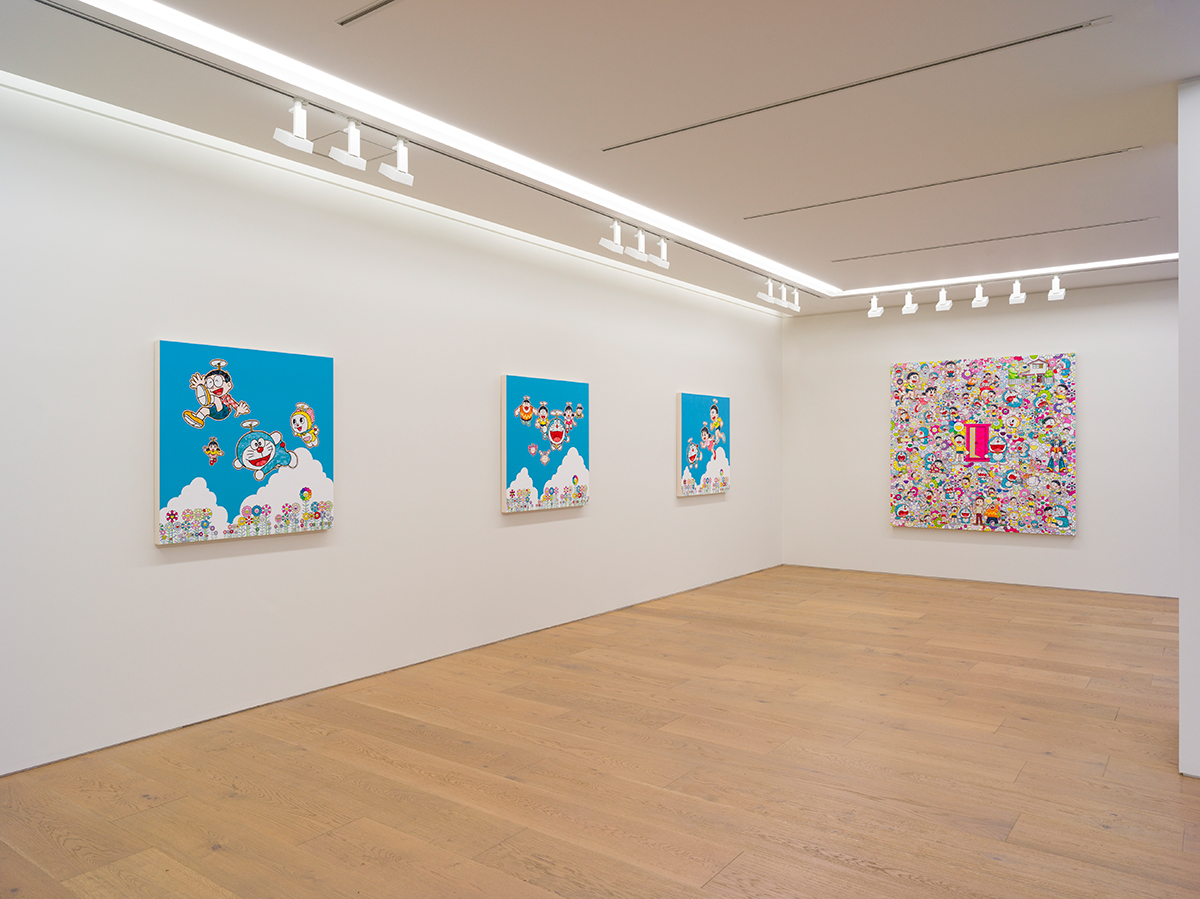 In 2005, Murakami curated an exhibition called Little Boy: The Arts of Japan’s Exploding Subculture, consisting of works exploring the “phenomenally influential manifestations of otaku culture”. Murakami’s adoption of the title character of Japanese manga series Doraemon dates back to this particular exhibition, where the story, to Murakami, seamlessly blurs the line between dreams and reality. He emphasized the irony in the Japanese notion that anime is perceived as less valuable when compared to other works of art when contrarily, this is fundamentally how art functions; blending things together. From there, Murakami’s acclimatization Doraemon grew and grew. Murakami has come to be a renowned artist in recent years, earning him multiple opportunities to work on commercial collaborations with brands like Uniqlo to make original t-shirts and plush toys distributed worldwide. This year, Murakami’s latest collaborative Doraemon works — which feature pieces of the Doraemon gang flying over fields of signature Murakami flowers as well as visuals in cut-out silhouettes of Doraemon — and will be showcased at his first exhibition at Perrotin Tokyo, also marking his thirteenth solo display. This spectacle will follow the artist’s previous retrospectives around the globe, including works from the Tai Kwun Contemporary in Hong Kong and the Garage Museum in Moscow. As a response to the group exhibition THE Doraemon Exhibition, a group exhibition and a monumental feat in Murakami’s artistic career, Superflat Doraemon by Takashi Murakami celebrates the 50th anniversary of Japan’s beloved Doraemon. (Text Jordinna Joaquin)