Facing Uncertainty, New York Chooses to be Optimistic and Inclusive 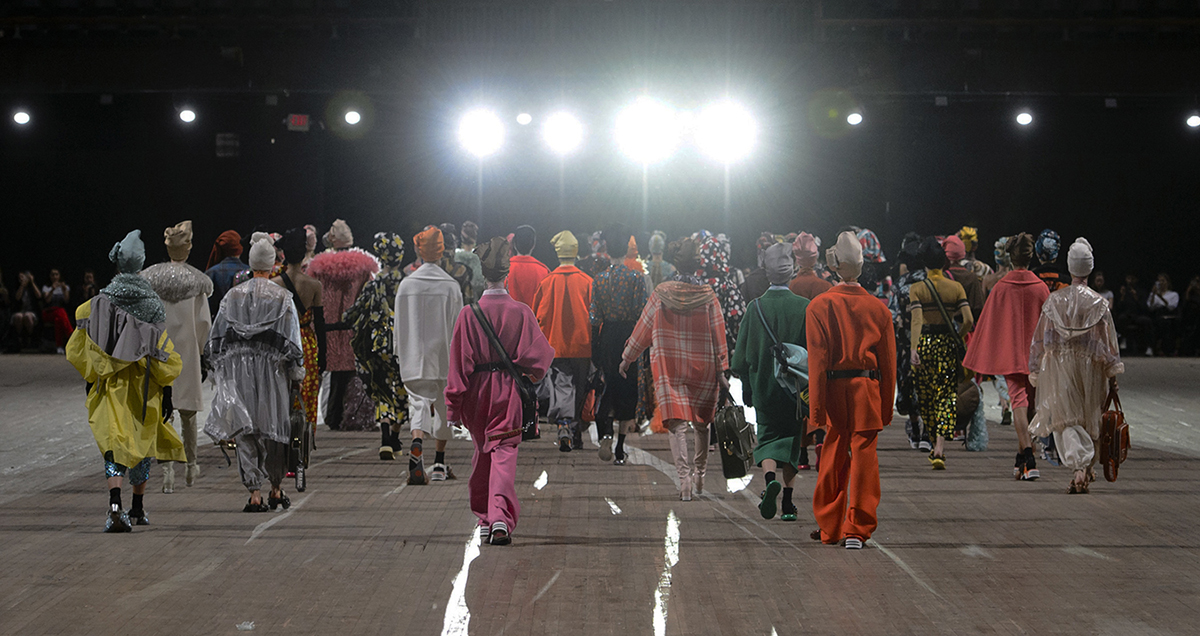 With Proenza Schouler, Rodarte, Altuzarra and Thom Browne left America for Paris, New York has lost some of its most innovative designers, leaving the city with one unsettling question: Is New York going to be fine?

The week opened with some sparkles and flashes of skin at Tom Ford. The mood, which was expected to be somber and unsettling was instantly illuminated. Then there was Alexander Wang, whose guerilla show delivered models out to real street from a party bus that traveled around New York and beyond. At Fenti x Puma on the other hand, motorbike was literally flying before models paraded down the sand dunes filled runway. And finally, at Ralph Lauren, the collection was showed alongside his fancy vintage car collection, which included some of the world’s most expensive cars. The shows were still there.

While many designers in New York experimented in the way they show their collection, others chose to offer what New York is best known for: good clothes to wear. Victoria Beckham was one of them. Beckham started off years ago in the industry with unforgivingly tight dresses and hard-to-wear Hollywood-like wardrobe, but what came down the runway was delicacy and easiness in dressing. Sheer pencil skirts that gently layer roomy shirts, flounces here and there that sway as the models move. Frills on the collar is a costume territory, but Beckham makes it impossibly chic — the white tunic worn under a black loose pantsuit is the maestro of the collection.

What New York is also known for is the idea shortage, so when the new designer in residence at Helmut Lang – Shayne Oliver — showed an aggressive first outtake — bizarre garments placement, off proportion and the notion of gender is, once again, questioned — the mind was completely aroused. Raf Simons’ Calvin Klein possesses similar quality too, though executed in a different manner. Simons, alongside his longtime right hand, Pieter Mulier, continues reviving American aesthetic by infusing its cultural icons, but in a more unconventional way. Plastic shaped into classic 1950s silhouette frocks, cheerleader pompoms assembled into massive fringe dresses and Andy Warhol’s works placed onto white cotton smocks — not to mention the previously cowboy uniform which is updated here in shiny satin. With its gruesome colors and hostile materials, Raf Simons’ latest collection for Calvin Klein expresses a much-needed optimism for American creativity.

The positive air also came from rising new talents such as Sander Lak, whose Sies Marjan show exuded color so vivid even the black numbers lingered in your eyes, and so does Mike Eckhaus and Zoe Latta’s unfiltered and unpretentious collection for Eckhaus Latta. However, the true optimist must be Marc Jacobs. Despite the unsettling rumors about his company and retirement, his show painted a different kind of picture. Yves Saint Laurent! Miuccia Prada! Jean-Paul Gaultier! The greats were all there, manifested in form of glamorous sequined gowns, psychedelic prints and whimsical styling. While the show, serenaded with nothing but the sound of camera flashes and dancing beads, was evoking a sense of mourning to the current state of New York Fashion Week, the collection read like a love letter that says: I’m not done yet.

Now that New York has lost some of its homegrown designers, it needs to ask itself why the city is unrivaled in the first place. Is it the grand affairs and parties? Or is it because of its good wearable clothes? Or what about its optimistic view and inclusivity? Never in the history of fashion have we seen such diversity on the runway until last week — voluptuous girls at Michael Kors and Prabal Gurung, the real, everyday people at Helmut Lang, more men and women of color walking the major shows, and most notably, a pregnant woman at Eckhaus Latta. The answer, perhaps, is all of the above. (Text Try Sutrisno)