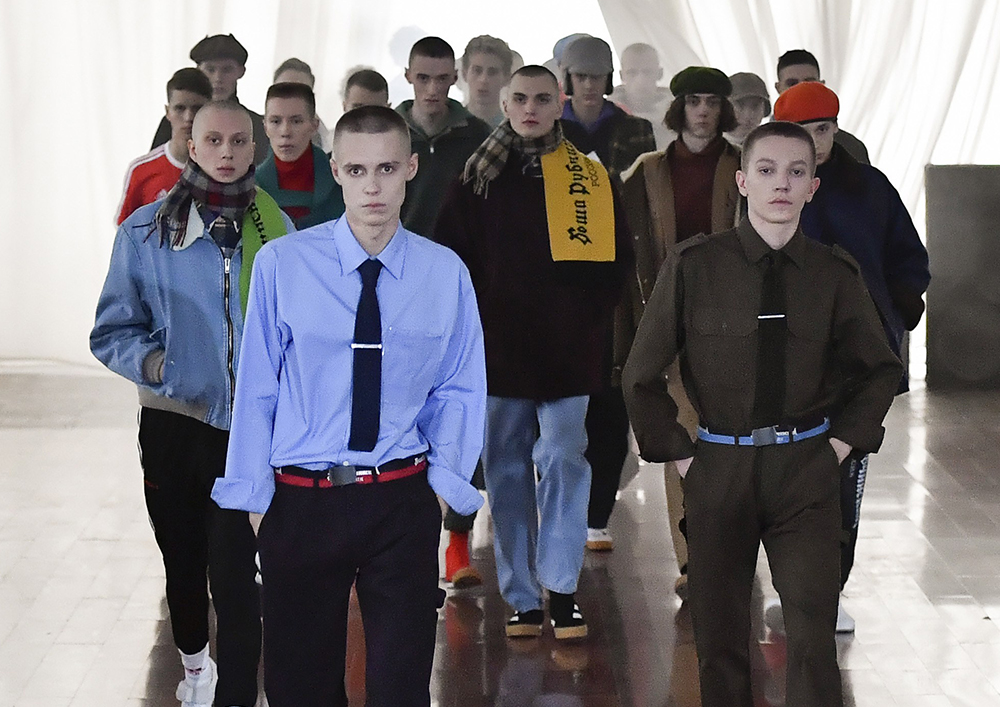 Gosha Rubchinskiy Fall 2017 Menswear. The Russian designer goes back to his homeland to stage his show as he carried on mission to portray the Russia today.

The Russian province of Kaliningrad played host to Gosha Rubchinskiy’s fall 2017 collection on last thursday as the designer carried on his mission to portray the Russia today. You could probably go a lifetime without hearing about Kaliningrad, but the former German seaport city found itself in a global spotlight last year after the Russian President, Vladimir Putin, moved missiles into the area, meaning they were close enough to attack Europe. With hacking rows and bribery claims, every week seems to bring increased diplomatic tensions between Russia and the West, but for Rubchinskiy it’s important that perceptions of his country and its people aren’t only shaped by what people may hear.

As we know, the Muscovite designer has devoted his eight-year-old streetwear brand to a kind of international enlightenment on the country he knows and loves—a much different Russia than we know from Western media. His adventure in Kaliningrad this season was born out of a more unifying spirit.

Rubchinskiy based his collection on sportsmanship, marking the impending 2018 World Cup hosted by Russia and referring to his collaboration for the next few seasons with Adidas. The show was “150% Gosha”, styled by the designer itself and cast by Lumpen model agency (which also handles Demna Gvasalia’s shows for Vetements and Balenciaga), with an all Russian line up of the designer’s go-to type (pale, slim and short-haired). The show opened with a loose-sleeved button-down shirt worn with a square-knit tie and skinny-belted trousers—it was about as polished as he has ever done. In their football scarves, granddad tailoring, polite schoolboy tracksuits, and typical British check hats by Stephen Jones, there was an innocent earnestness about the collection, which very much reflected the poetic young men from Moscow with whom Rubchinskiy surrounds himself.

Like Kaliningrad, Rubchinskiy is himself split between two worlds – his native Moscow, where he still lives and works, and the European fashion capitals where his clothes are shown, bought and (for the most part) worn. His is an unexpected success story, that someone who could appear to be such an outlier could win over so many, that the world and look of post-Soviet Russia could come to earn such a cultural cache for style-conscious Westerners.