Indonesians posting #BlackLivesMatter, don’t forget about Papua. The George Floyd case and BLM are topics much closer to us than you think. We need to talk about Papua.

Black Lives Matter is now the biggest civil rights movement in history. With protests taking place in all fifty states in the USA and stretching over to eighteen countries and counting, the people are—time and again—urging the government to not just listen but to act on the broken system they still continue to perpetuate today. Those who argue that this isn’t a race issue are blindly fooled by their own willful ignorance and actively choose not to look at statistics or acknowledge that racial profiling in the American criminal justice system is real. When you say that it’s not a race issue, you are disregarding the black struggle. 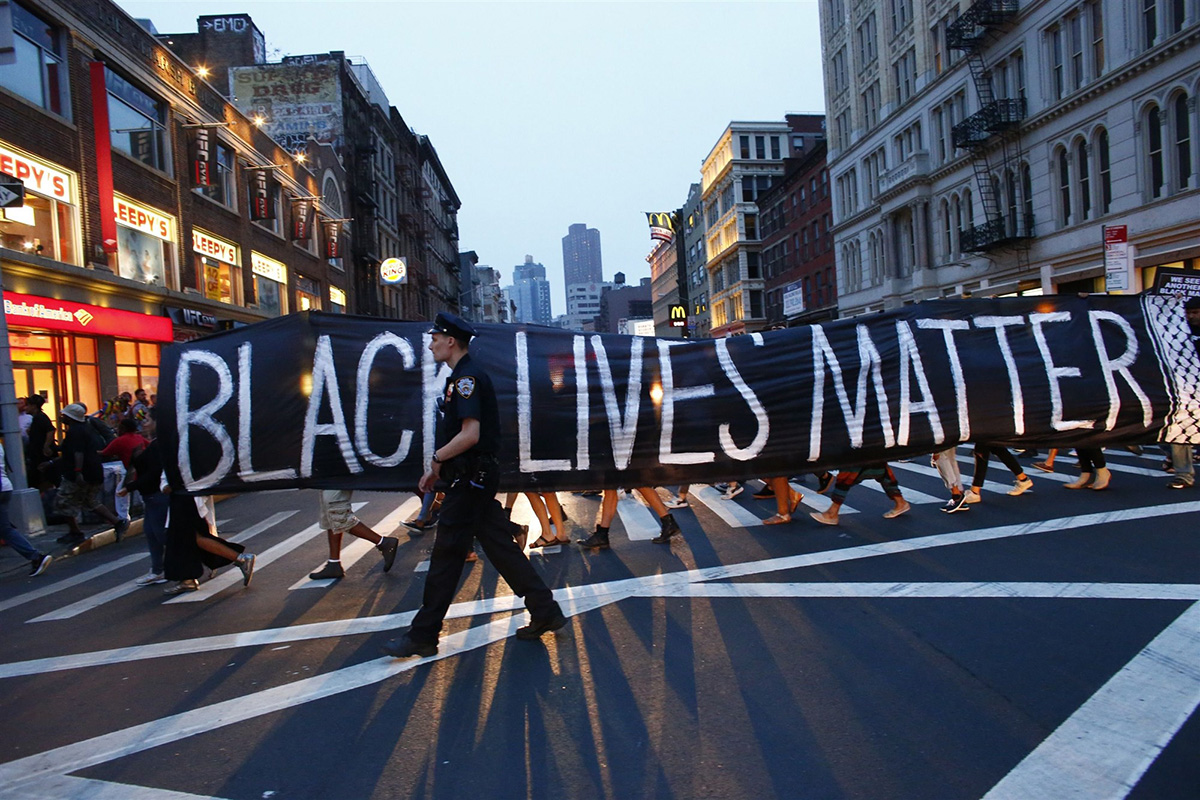 A police officer patrols during a protest in support of the Black Lives Matter movement in New York. KENA BETANCUR / AFP – Getty Images

This isn’t just a new trending hashtag, though. #BlackLivesMatter has been around for years, and no, George Floyd’s death isn’t an excuse the people are using as a pretext to “cause anarchy”; his murder was the tip of the huge iceberg. Black people are outraged, they have been for ages, and they have every reason and right to be. After firm pressure from their citizens, government officials are considering defunding the police or a drastic reform of the state’s public safety system. When racism is instilled within an institution, and you give authority to those who propagate violence against harmless folks, we can be reminded of something the artist Jenny Holzer once wrote: abuse of power comes as no surprise. Much has happened since George Floyd, an unarmed black man, was suffocated to death by that police officer and as the other three officers surrounding them merely let the murder carry on after Floyd was arrested for an alleged fake twenty-dollar bill. The policemen in question have since been arrested. Derek Chauvin, the officer who killed George Floyd, has been charged with second-degree murder, while his cronies are facing charges for aiding and abetting second-degree murder. Minneapolis City Council members announced that they intend to defund and dismantle the city’s police department. Donald Trump, President of the United States, sought refuge in a bunker at some point when protesters came to the White House. Several statues of racist figures and slave traders have been defaced and thrown into large bodies of water. Updates about protests, the BLM movement, how to be antiracist, what it means to be abolitionist, ACAB, black cinema directories, and black revolutionary texts… these are just some of the many news and subjects currently occupying most of our timelines right now, on any social media movement.

A protester kneels on the statues neck in scenes similar to the death of George Floyd in Bristol. Credit: PA:Press Association

For Indonesians, George Floyd’s death and the Black Lives Matter movement echoes a familiar conflict. While many among them are supporting the #BlackLivesMatter and #JusticeForGeorgeFloyd hashtags, Indonesian rights advocates and activists and young people have spoken out on how racism is still very ingrained within Indonesian communities. They’re reminded of West Papua, especially last year’s antiracism protests and the government imposed

Internet blackout that occurred after—something which the Jakarta Administrative District Court has found President Jokowi and the Minister of Communication and Informatics guilty of, deeming the blackout “unlawful” and therefore legal violations. 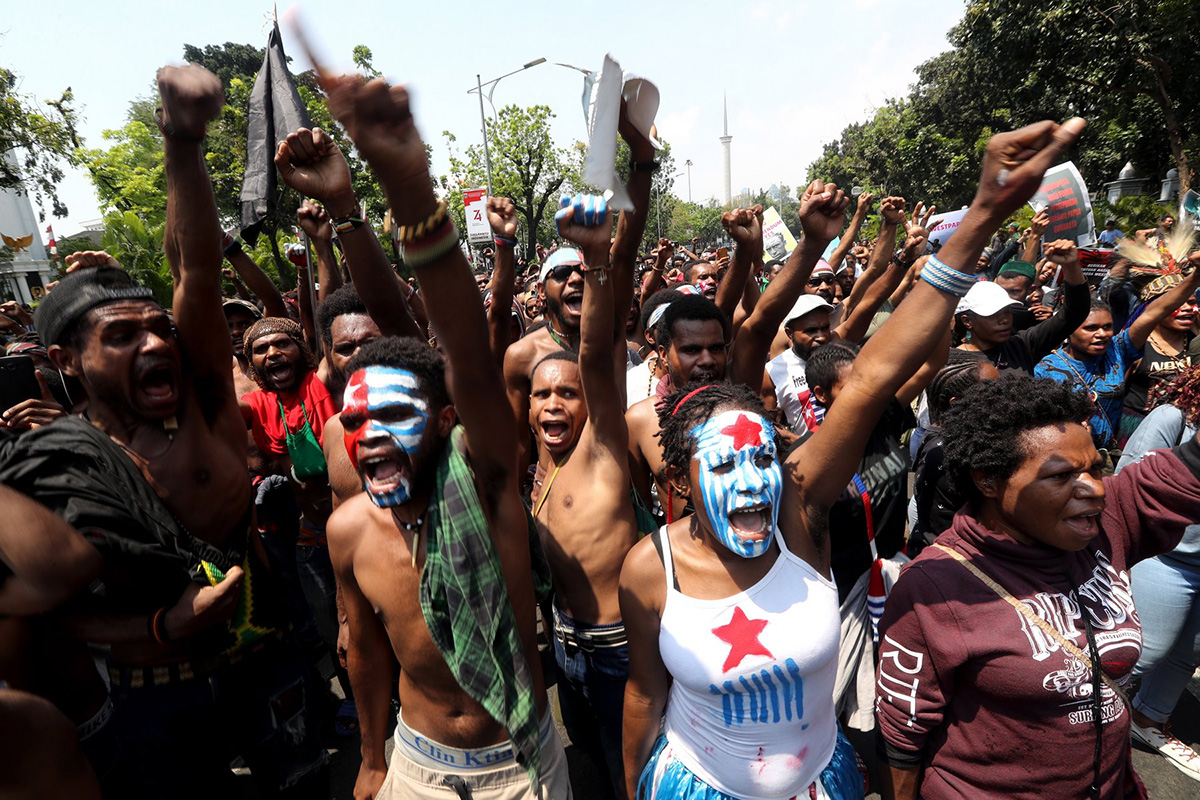 Papuan activist Rico Tude mentioned in a tweet that the Indonesian reaction to George Floyd’s death is “inversely proportional” to when Papuans here are racially abused, bringing to light the double standards that Indonesians are guilty of when addressing racism abroad and, contrastingly, at home. Some are afraid of having that conversation about Papua, after all; it’s a sensitive topic and Papua’s long history and politics mustn’t be taken lightly, and shouldn’t be treated as just an addition to the African-American narrative. They’re similar issues, but it has to be enforced that while one reminds people of the other, they’re not necessarily apple-to-apple comparisons. Nevertheless, we can agree that we’ve never seen this volume of young people amplify the West Papuan conflict with such passion and urgency.

Like the Americans, though, the Indonesians talking about Papua have taken to criticizing the Indonesian government’s efforts—or lack thereof—to put an end to the human rights abuses in Papua, encouraging antiracist behavior among Indonesians, and demand that the Papuans be given their right to protest. While President Jokowi has applied several measures to improve the development and infrastructure in West Papua, he’s been met with criticism and arguments concerning Jakarta’s constant failure to confront the violations of human rights and repression of expression against Papuans. 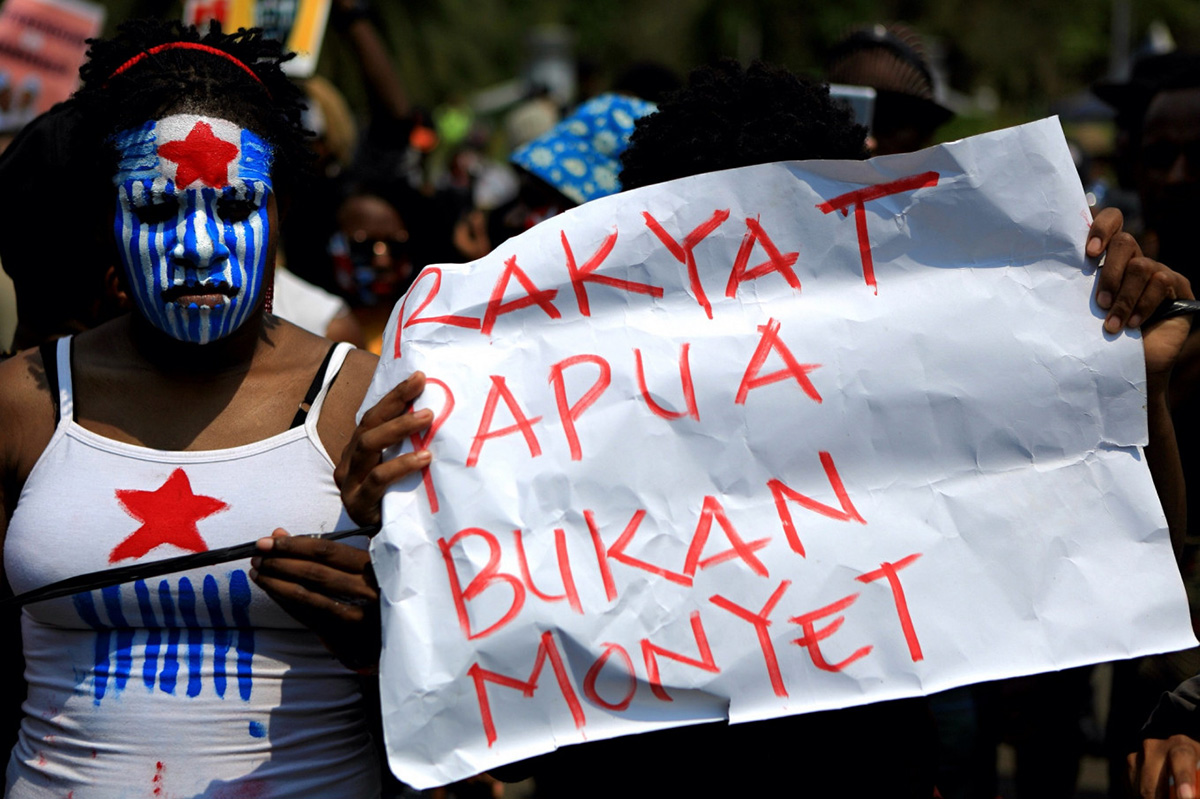 The protesters held the rally to urge the government to solve a racial abuse case against Papuan students in Surabaya, East Java. (JP/Seto Wardhana)

It’s definitely a move forward among Indonesian youth especially to start conversing about and for Papua. There is countless evidence that proves the actual power of people power, Black Lives Matter included. It’s when we speak up and when we pressure and insist and continue to amplify these issues at hand that can cause impact because talking about it is where it all begins. But we as Indonesians outside of Papua must remember: it’s not about talking on behalf of them, it’s about passing over the mic to them, about letting them speak, giving them their freedom and right to express, to protest, to be angry.

Let’s be careful. But most importantly, let’s fight to continue this dialogue until we see change. (Text Jordinna Joaquin)