Tangan Showed the Power in Minority

Indonesia is currently undergoing a rather trying time at the moment. A couple of months ago, a Chinese-Indonesian Buddhist woman was imprisoned for mentioning that her neighborhood mosque was too loud, an environmental activist was put on trial by the court for defending a plot of forest and within a short span of a few years, a harsh spotlight has been put on the once-ignored LGBT, with new laws being introduced to try to criminalize the community. Yes, Indonesia is not a big fan of the minority. Despite the proclaimed democracy, here and now, minorities are treated as an outcast. A threat to the ‘moral’ of the nation.

Incredibly, though perhaps unconsciously, that’s what Tangan show chose to celebrate last Thursday with the mad-looking models and brutally deconstructed clothes. Showcasing the group of the unwanted, the rejects that have been branded unworthy to be a part of the larger society. 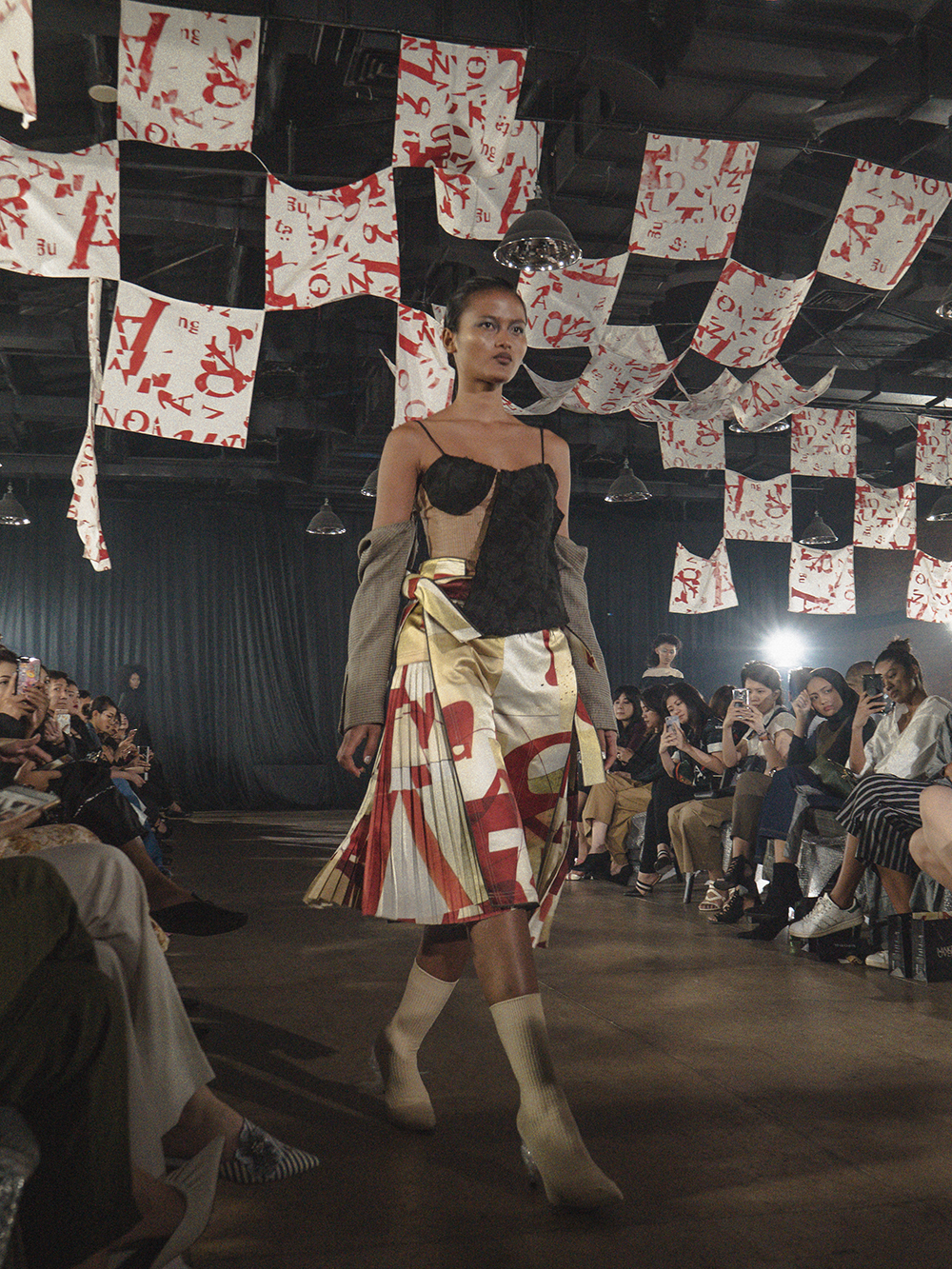 We were seated in a place resembling a warehouse. Above us were flags with a custom-made print of deconstructed typography made in collaboration with Marshella Jastine, which also popped out here and there in the collection. As the lights went off, the curtain showed silhouettes of the models lining up, ready to get out. Then, a topless male model sprinted through the runway while wearing a printed headscarf, signaling the beginning of the show. That opening act was followed by a gang of models slowly swaying in Tangan best creations to date.

In this collection, a plaid blazer was spotted as a bottom of a dress (or was it a skirt?); a gigantic square duvet fabric, when tied, turn into a sleeveless dress-cum-trench coat; jackets/vests were double-faced, and a layer can be unbuttoned to create a peeled-off effect. There was a lot of clothes manipulation going on. It was as if a fashion stylist has gone mad. Indeed, both Margaretha Novianty and Zico Halim are also fashion stylists who are still active in the industry, and it is clever of them to bring those stylist’s manipulation skills — mix-n-matching, wrapping, draping, and knotting — into their design’s sensibility. Adding that to their deconstructive aesthetic and great tailoring, both Novi and Zico have managed to create a strong brand identity in a short time.

What’s more, they managed to include a lot more easy-to-wear pieces this time, like the sharply pleated skirts and striking balooney pants, both which, would look as good with a simple white t-shirt as with any of their now-recognizable deconstructed blazers. Their lean trouser has also become much more relaxed than a lot of different kind of women could easily pull them off.

The 90s-art piece titled “Ten Heads Circle/Up and Down” by Bruce Nauman, which looks at the contradictions in communication between mankind, is the starting point of this collection. Novianty and Halim were inspired by the absurdity and violence of the piece. “Ten Heads Circle/Up and Down” may not talk about the minority in general, but it does discuss how the way we communicate has been eroded, resulting in prejudice and alienation. Beyond what we saw in the savagely-done clothes, the show itself — with venue, set, and music referencing 90s raves — brought to mind the aggressive underground party that happened in that era (think of boys and girls banging their head through Rammstein Du Hast) echoing the separation between the popular and nonstandard.

At the finale of the show, the lights flashed blindingly through Fatboyslim Sunset (Bird of Prey) and all the models walked out hand in hand, announcing the end of the show. What’s most wonderful about Tangan is that they bring a distinct voice to our country’s fashion industry amidst Indonesian designers love for the conservative and sometimes predictable preference for all the glamour and heritage. This collection, in particular, is a welcome statement to defy society’s common belief that we should only listen to popular opinion, where it is exactly in the unpredictability of the forgotten, the outcasts and the ignored that shapes unity in diversity. In the end though, despite the unnecessary theatricality, the clothes on their own are captivating and effective enough in carrying the message, that Novi and Zico should simply trust their creations to do that and let go of the gimmicks. (Text Try Sutrisno)