The Element of Art in Performing Arts

The Element of Art in Performing Arts. Justin Shoulder shares about his mythical creatures, the underground zeal, the childhood imagination and his performances.

An imagination goes a long way. There is always room for imagination to converse about the present-day challenges of life, to transform issues and problems into something creative and to translate mundane works into unique, interesting yet subliminal piece of art.

Works of art and issues-translations come in varying forms and sizes and Justin Shoulder finds his on the body. The Sydney-based performing artist pulls threads of influence from his cultural background, his childhood memories and his wild imagination into his body of work comprised of performing arts and movements.

We may have witnessed Justin Shoulder’s “Carrion” performance at First Sight II Museum MACAN, along with his eccentric props, inflatable structure, strobe of light, high-fume smoke and his transformation into this mythical-creature slash post-human specter. This particular body of work may have stroke some, intrigued some, while for most it may either be an emotional journey or a whole new level of art and performing that never crossed their minds.

Performing arts allow the audience to interpret and find a sense of sensorial response through the artists’ work. Justin Shoulder opens up a new experience of what the body can do. The artist embraces the familiar, the past, present discoveries and the future forecasts, as well as the ancient and modern terms into his creative cultural framework of his performances.

A journey will never begin not unless one experiences and be fully immersed in them. Justin Shoulder recalls back his cabaret and circus performances days where he began his journey. “I worked with a lot of my body, I was into media arts and have always been performing in Sydney. I really think Sydney is always so rich in the performance history, especially in the LGBT scene. So I did numerous cabaret shows, circus-like performance as I was very much engrained into the sub-cultural space.”

Having admitted to plunge into the underground scene allowed Justin to fully express himself with his body. He believed that seeing the works of others through communities and performances really moved and inspired the work he began delving into. “My friends and my communities have always been there. Although I enjoyed my formal education, the real stuff happens when I watch other people perform with the energy and the spirit that I can become a part of.”

The Early Days and The Heritage

As a kid growing up, imagination for Justin has always ran free. Being the nonchalant seven-year old boy he recalled to be, he quickly put his wit and creativity into practice. “I have always retreated into my imagination; I would build dioramas, make little environment with my sister and home and inhibit them. My childhood is a biggest part of my history and it is interesting to have lived in a community of very diverse cultures.”

Justin also admits of being enthralled by the experience of the Chinese Dragons during Lunar New Year. “It’s always exciting to see the body feeling a little too scared yet excited from encountering these dragons. I loved how it made me feel so alive.”

My childhood years have heavily influenced my interests in performing arts. There’s always the elements of fantasy, science-fiction, even horror, some of the things I grew up enjoying, that are translated into my work now.”

The interest that grew out of the childhood and even cultural spaces became an emotional journey for Justin Shoulder. Not until 2007, Justin developed the work called Fantastic Creatures featuring figures and mythical creatures, including Carrion. “Intensive research, my cultural backgrounds as well as my childhood memories became the pinpoints to my creatures. Also, my Filipino ancestral lineage have provoked me so that is why I began focusing on masks, including for Carrion.”

Carrion or elaborated as the “flesh or carcass that animals eat on” becomes a strong reference to the story Justin Shoulder tells the audience. Queer, ancestral and even intercultural experiences are bounded by the human-specter, shape shifting in language and forms, colliding both the distant past and far future of the world. Exploring what it means to share a space between human, machines and animals, the concept of the performance draws close to the creature’s relationship with existing environment and the environments to come.

“There is a part of Carrion that I have wanted to share to people, be it through my ancestral and cultural heritage or even the issues and challenged we face today as modern humans. This piece is inspired greatly by Caryn Ileto, where she helped me a lot through the visuals, the sounds and the technical to the work.” 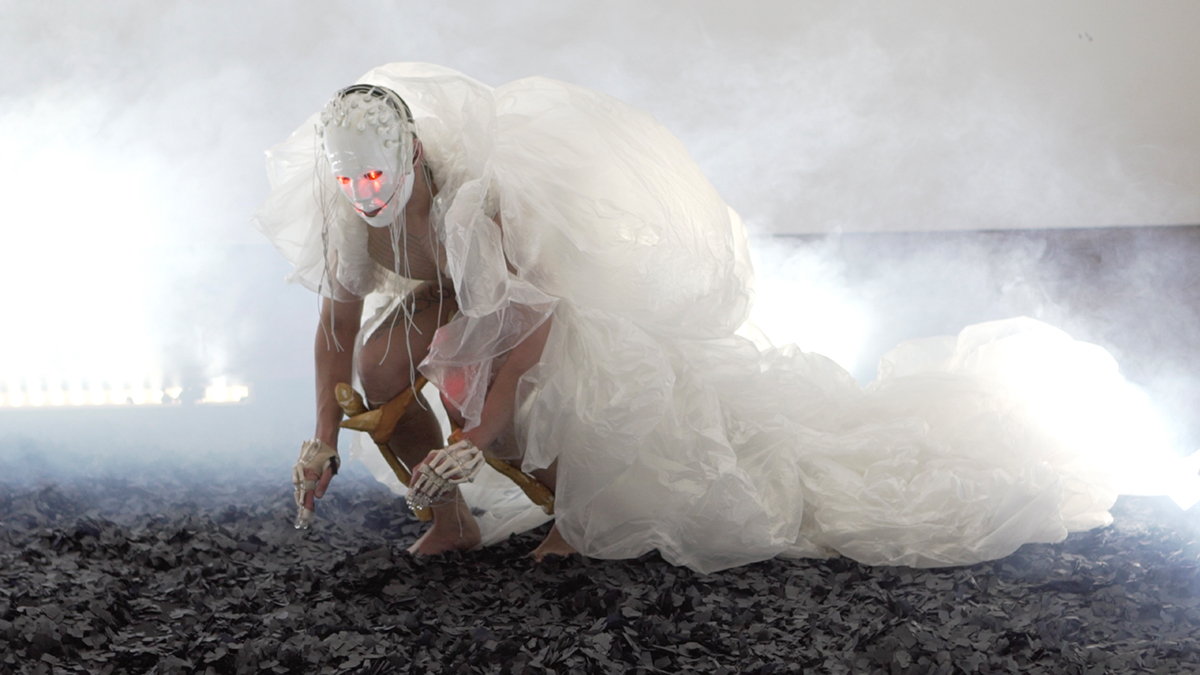 Justin also believes that the idea of White Supremacy have somewhat placed an indirect downtrodden experience to many, an issue he recalls in Carrion. Another particular issue he told us was about climate change, a phenomenon he considers personal and very close. The latter goes hand in hand with a pop cultural reference he used as an inspiration to Carrion.

“Climate change is a great part of Carrion. Connecting to that, I was also inspired by Lana Del Ray’s Summertime Sadness. There was actually some time where I would mumble the song as I performed, just to get the mood.”

Apart from the music, Justin also admitted of satirically writing a piece of poetic weather report, which reflects on the shift of the climate, environment and calling people to have that sense of urgency to show their concerns.

In essence, Carrion carries an emotional feedback to the world and the world to come. “There’s politics, there’s the environment, there’s the issue of being in a world so degrading and it is a very allegorical piece.”

Past and Present in Technology

The energy through social media always intrigues Justin. The idea of a space around us with others we do not know will always find a way to discovery and experimentation, a side of modern human form that Justin Shoulder have always found interest in. “Social media and technology has such a a deep and resonating impact on people. There’s this unavoidable interaction between people and I think it’s a very powerful tool that we are all accustomed to.”

With his work in place and his future performance set in stone for the grander theatres and wider audience, Justin Shoulder mulls over the may different possibilities and opportunities that may come his way through the realities of the present day. “I know we can always connect to new people and find new communities to collaborate with and these various platforms we are blessed to have will surely accommodate to that for my future works. I think it is incredible and wild at the same time, when you think about the future.”

Eccentricity is one to embrace and for Justin, the world of performances and arts will always have his heart and mind. “I want to be able to communicate something globally and just be involved in the story-telling process that were not known before. We are part of a greater ecology and if we want to have a particular world to share with the future generations, then we have to work towards it now. That can be through anything, really, through any forms of arts, mediums or work that we come to enjoy doing.” (Text Beata Primana)