Looking Back to Move Forward with Anika Leila

Looking Back to Move Forward with Anika Leila. Balancing sustainability and sentimentality, Anika Leila is the Central Saint Martins graduate to keep an eye on.

As one of the fresh young designers to have presented their work in the highly anticipated Central Saint Martins’ graduate show this year, Punjabi-Indian graduate, Anika Leila, has been stirring buzz for her eccentric yet delicate creations. Despite the collection being her debut, looks from her collection have been featured in @diet_paratha, Vogue and heavily talked about amongst fashion enthusiasts online, so who exactly is this young talent that everyone’s been raving about?

“Anika Leila upholds sustainable design to the highest regard, with a continuous notion to push the limits of up-cycling while also maintaining a unique and intimate garment,” says the designer as we ask her to do a self-introduction. The statement is a strong and solid one, these core values of her brand are based closely to her familial upbringing, with her family and her background being her biggest source of inspiration. 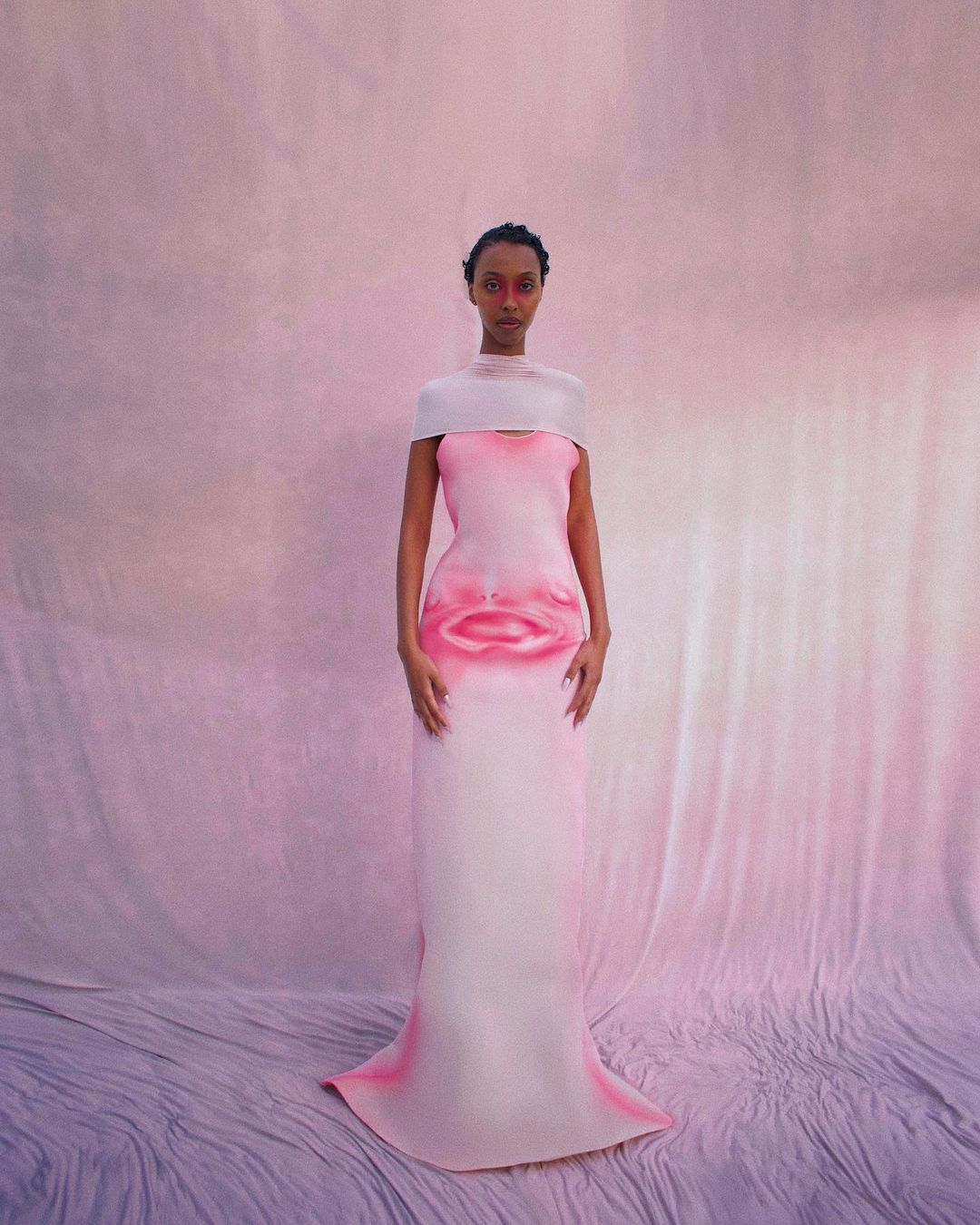 Anika calls herself a “Londoner through and through” being born and raised in the city she’s currently based in. Her earliest childhood memories are filled with sweet memories of smile-filled days spent with her grandmother, as her parents were both working. Her grandmother was the one who gave Anika one of her first exposures to fashion, with her hand-making her own clothes in a raw and organic way. Meanwhile her father was the one who started embedding the importance of sustainability and environmental consciousness.

“The fact that I  grew up with 3 other siblings meaning we always had clutter, toys, materials and other bits and bobs laying around the house, fuelled my interest in art and design, because I had a lot of already existing material in my surroundings that I was able to experiment and play around with from a young age,” Anika further explains, “I learnt a lot through observation and by being very curious as a child, and that gradually grew into a desire to go further than learning by personal practice and experimentation. I remember working hard at my job as a Waffle maker and waitress at Creams Café in Slough so that I could afford my first sewing machine, and then a mannequin, and then all the other bits and bobs I needed to practise as hard as I could.”

The designer then pursued her quest for further knowledge at the prestigious Central Saint Martins. During her time there, she shared that the school encouraged their students to take a more independent approach to their studies. Although this might be uncomfortable to some, Anika shares that this method has helped her flourish more into the artist she is now. But despite the positive impact her years there has left on her, “I think something that is important to know to anyone considering applying, studying fashion is very expensive. I had to work full time throughout my degree to ensure I could pay for resources, materials and travel. It was A LOT and I struggled to have an adequate work/life balance,” she advises.

For her graduate collection, Anika decided to look back onto her childhood for inspiration, mainly from a game that she was constantly playing whilst her parents were working, perfectly titled “Anika’s Odyssey”. “The game is about the journey this young girl (called Anika) goes on in order to get her toy bunny back and she meets various creatures and monsters along the way at each level. I discovered this game at quite a young age (6), and have always been quite attached to it and the storyline,” she shares. As 23-year old Anika reflects on her experience back then, she realises how the game has taught a young Anika the power of manipulation, “Anika’s Odyssey taught me that i should do whatever it takes to get my way, even if it meant manipulating others. I used elements of this game to contextualise my personal life, narcissism and how I could physically represent various forms of manipulation.” 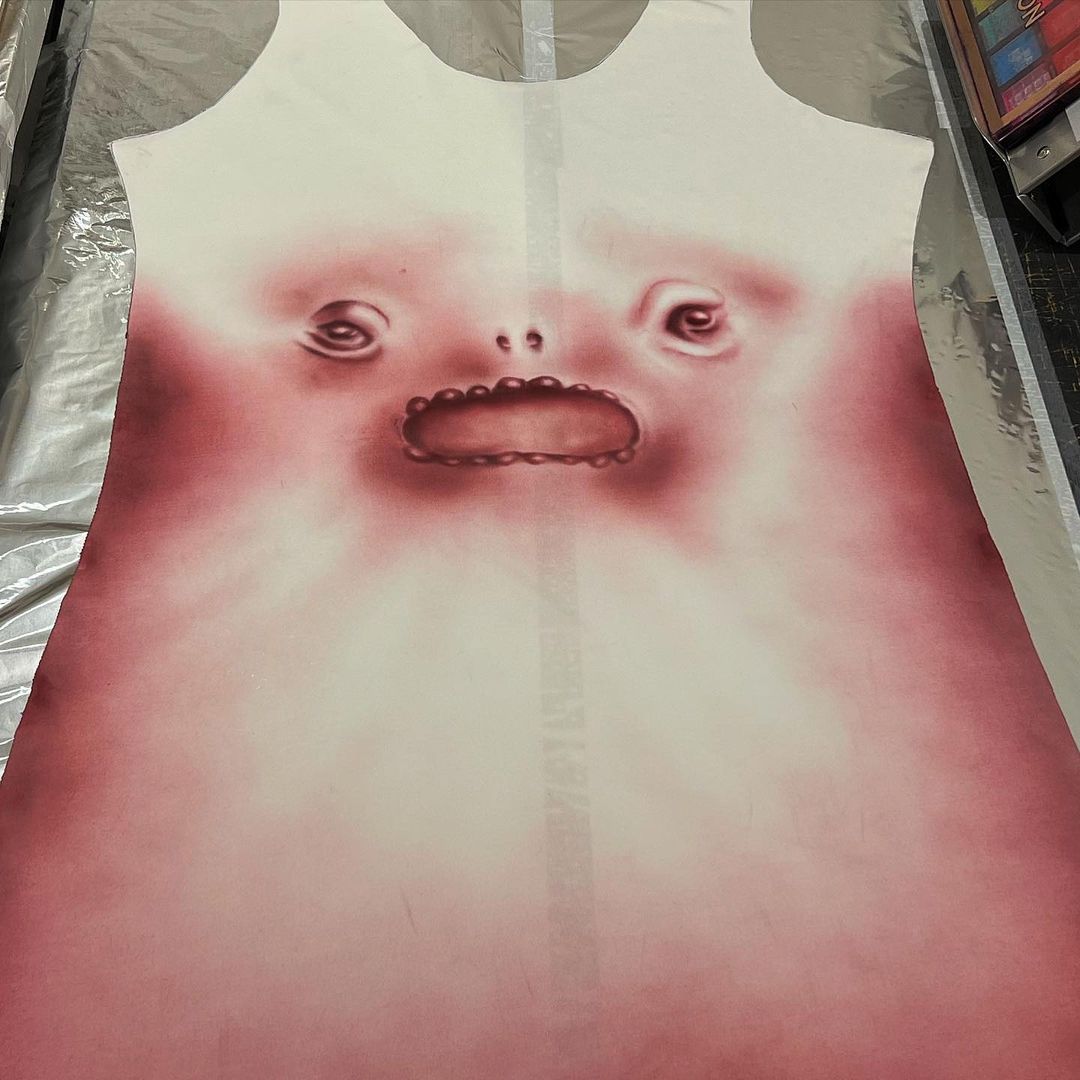 Monsters in the Making. Image courtesy of Anika Leila

The images we spot on top of all the garments of the collection were based on the monsters that were present in the game. She confesses that the imagery she includes into her collection was tough during the research process as she had to deep dive into intense and uncomfortable topics that were present in her childhood, as well as the added burden of having to explain all of these to her tutors. “After this hurdle, it became an exciting and thrilling path down memory lane that created familiar feelings of joy and comfort,” she confesses, “My mum kept memory boxes for my siblings and I, so it was really interesting going through those and using my childhood drawings and scribbles as research  […] to get a real insight of the type of individual i was and how it has shaped the person I am today.”

Another key point of why Anika’s collection was the talk of the town was the technique she used in creating these illustrations. Although the prints look printed or even sprayed on, the designer uses discarded makeup to illustrate these graphic illustrations onto the fabrics using makeup brushes. This idea initially was rooted from how the designer realising how fast paced the beauty industry is growing and that results in a huge amount of makeup being discarded as waste and how this harms the earth, “Makeup is one of those things that’s hard to resell when you don’t want it anymore, but also hard to recycle when it goes out of date. This gave me the nudge to keep looking out for makeup being thrown away and actively seek it out from people I knew who were having a makeup clear-out.” 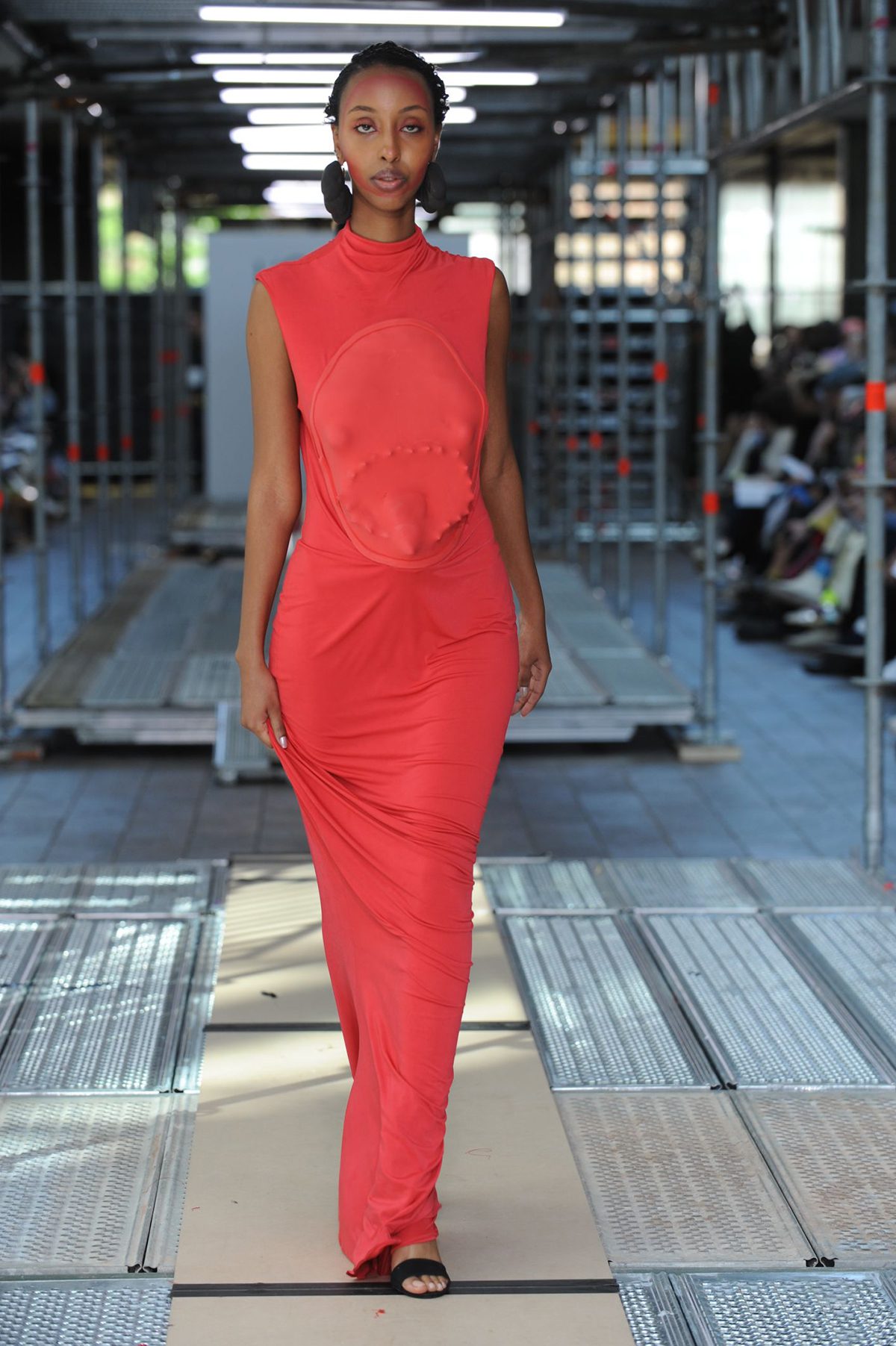 Although the idea of using makeup on textile might raise questions at first, the final output is then sealed with a homemade non-toxic sealant formula to make sure these illustrations stay on and won’t smudge when being worn. “The longest part of developing the technique was finding the right sealant formula because without it, the garments would not be wearable,” answers Anika, revealing that this sealant formula was created through trial and errors done by the designer herself.

The process of creating this collection was filled with triumphs and turbulences, with financial struggles also taking a toll at the pacing in which the designer could work on her project. But the opportunity to reconnect with her younger self, “has really helped me change my perspectives on myself as a person and a designer, while also motivating me to look into my own childhood in future projects.” This project has also encouraged her to look back into her past to find more musings for her future projects.

“I plan to continue to work for my own brand Anika Leila, as well as working within the industry and learning as much as possible,” she envisions, “I imagine myself to be continuously innovating and experimenting with sustainability in mind! And also a happy designer.” With a clear vision of her identity and a refined knowledge of technicality, we can only look forward to what comes next in Anika’s bright future ahead. (Text Vanya Harapan)