Why You Should Keep an Eye on Peter Do

Why You Should Keep an Eye on Peter Do. Get to know the designer everyone who’s anyone is raving about and his latest NYFW debut.

Before starting his own label, Peter Do worked at Celine during the days where Philo was leading the French fashion house, getting a front-row seat to learning everything there is to know about timeless clothing and clean tailoring from the master herself. After his time in Celine, he moved on to work at Derek Lam in New York. This was the time where the Vietnamese designer started to connect with his friends from all other points of the fashion industry to get them on board with the idea of starting the Peter Do brand. With Do working for Derek Lam on weekdays and only having time to source fabric during his breaks, he needed the extra pairs of hands. With everyone on board, the namesake label was then slowly developed in Do’s living room in Brooklyn and slowly put the Peter Do brand everyone’s raving about piece by piece.

The brand then established itself in 2018 and was set to being a brand that “always put family first through its commitment to creating a brand that is rooted in kindness and mutual respect.” Building a brand that was communal and amicable was something that Do has always envisioned, “I wanted to build a company where everyone is nice,” he says to W Magazine, “A company where people are excited to go to work and are treated fairly and can grow.” And indeed they did grow, with global stars sporting their pieces on big-name events, and a LVMH Prize nomination under their belt too! Perhaps the reason why the brand is so well put together on the outside is because the brand is just as tight-knit on the inside. 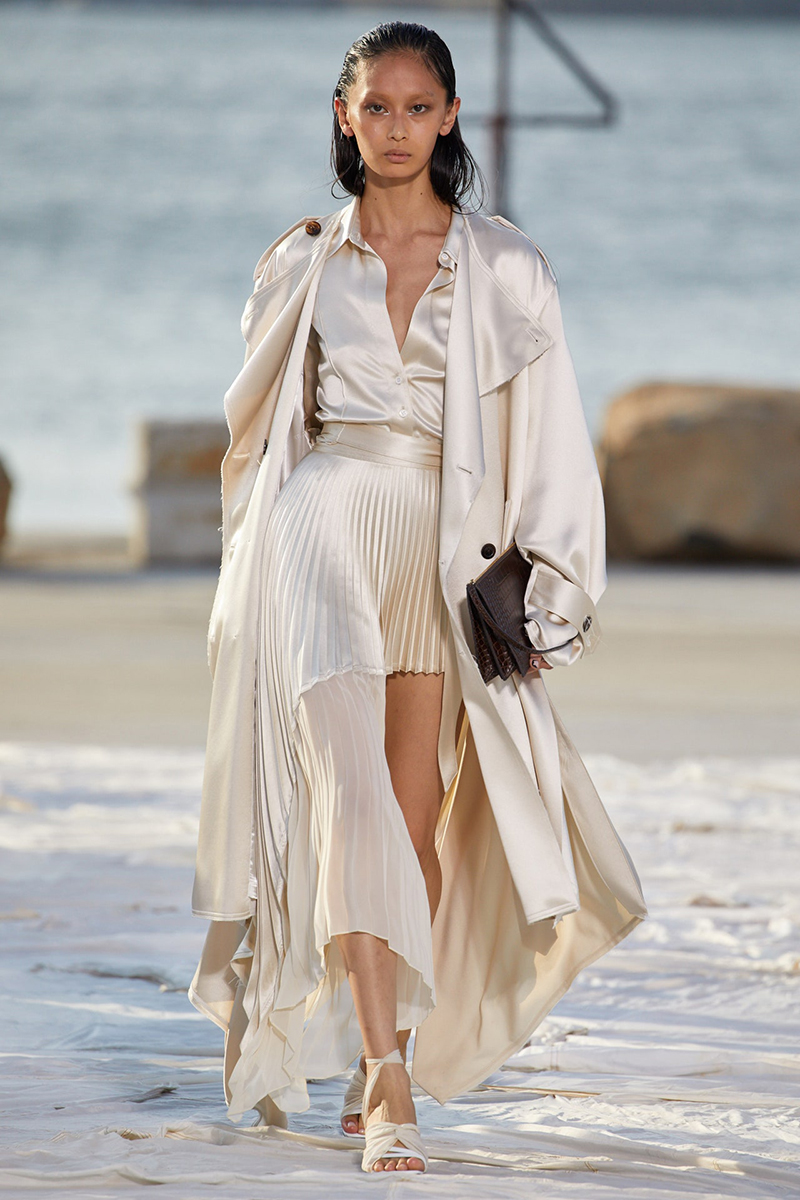 Photo: Courtesy of Peter Do

After 4 years of constant growth, Peter Do has finally made their New York Fashion Week debut with their Spring/Summer 2022 collection. The debut show was set on top of a rooftop located in Brooklyn with the ever-so-majestic cityscape of Manhattan serving as a background to the presentation. In his past collections, Do was known for his edgy and tough take on womenswear, creating collections that were perfect for the modern-day boss lady with a touch of grit, but for his NYFW debut, it seems like he has decided to soften up a little. Looks that usually comprise many layers were now lessened, and instead of firm and structured fabrics, you can see that this time more light and airy materials are being used.

The collection consisted of 46 looks, with a subtle yet luxurious-looking color palette that speaks volumes. Do saw this NYFW debut as some sort of homecoming, as his hand-written notes to his guests compare the experience to his Pho-making experience with his father. “A good Pho is reduced and edited, to an essence,” part of the note says, which is also a fitting metaphor to the refined take on wearable womenswear collection he’s showcasing. To an average person, a Peter Do show might not seem extravagant and grand enough to be raved about by everyone, but once you take a closer look at the amount of intricate tailoring and cutting the looks possess (note the amazing pleating details), then you’ll be stunned. Colour and textile choices are also something that does has a knack for – combining satin, leather and pastels to form a cohesive collection is not an easy feat.

When it comes to the silhouettes of the looks, Do draws back to his heritage for inspiration. During the design process, he looked back on photographs of his parents and his grandmother for inspiration. The long dresses with trousers peeking out from their slits were in fact his interpretation of the traditional Vietnamese ao dai, an idea that sparked when he stumbled upon a photo of his grandmother’s church outfit. Similarly, a photo of his mother holding a rose was the key inspiration to the floral embroidery that can be seen in the show’s final few looks.

Although the latest collection does seem quite different from what we usually see from Peter Do, the brand still continues to put out elegant and empowering pieces that every woman would want to power strut into a board meeting with. It’s timeless, minimalist luxury at its best, and Do continues to prove that he’s a designer everyone should be keeping an eye on. (Text Vanya Harapan)