After winning last year’s LVMH Prize Special Prize, not to mention being the only South Korean designer to become a finalist for the prestigious award, Rok Hwang made his long-awaited debut for his London-based brand Rokh’s Autumn/Winter 2019 collection this year as a newcomer at Paris Fashion Week.

Known commonly for his work at Celine, Chloé, and Louis Vuitton, – as well as an alum of late Louise Wilson’s Womenswear MA at Central Saint Martins – Hwang is immensely talented, having already gained the support of 120 of the world’s best retailers, namely Net-A-Porter and the powerful and paramount people of LVMH, according to Vogue. The fact that Hwang copped the Special Prize after pitching his label to a menacing panel of judges consisting of Karl Lagerfeld, Marc Jacobs, Delphine Arnault, and Nicholas Ghesquière as a designer in only his third season is tremendously impressive, almost prodigious. Hwang established Rokh back in 2016, wanting to “project the women we believe in”, which includes a group of individuals who is not confident but rather youthful and fragile, perhaps even brittle in some way. His work, of which can be interpreted as youthful and fragile, are undeniably loud and, not exuberant, but as if they dare to be so bold to take up space unapologetically, like fragments of a broken thing sewn and mended back together, into a newer, more augmented versions of their old selves; proof of beauty in being torn apart.

This sort of deconstruction in Hwang’s clothing is actually an accurate reflection of what the designer’s creative process looks like; Hwang regularly goes to flea markets and car boot sales and takes apart and puts back together second-hand clothes like his own Frankenstein’s fashion monster, becoming his own scientist in his own lab, and then reevaluates the ways in which he creates his own clothing, straying away from igniting inspiration from the typical cut-out magazine clippings. Instead, his mood board (which Hwang doesn’t really consider a mood board at all, as his research is more an adventure and experimentation as opposed to outside influence) consists of fabrics and prints and references of his own work; a tangible example of learning from oneself and preserving valuable authenticity. 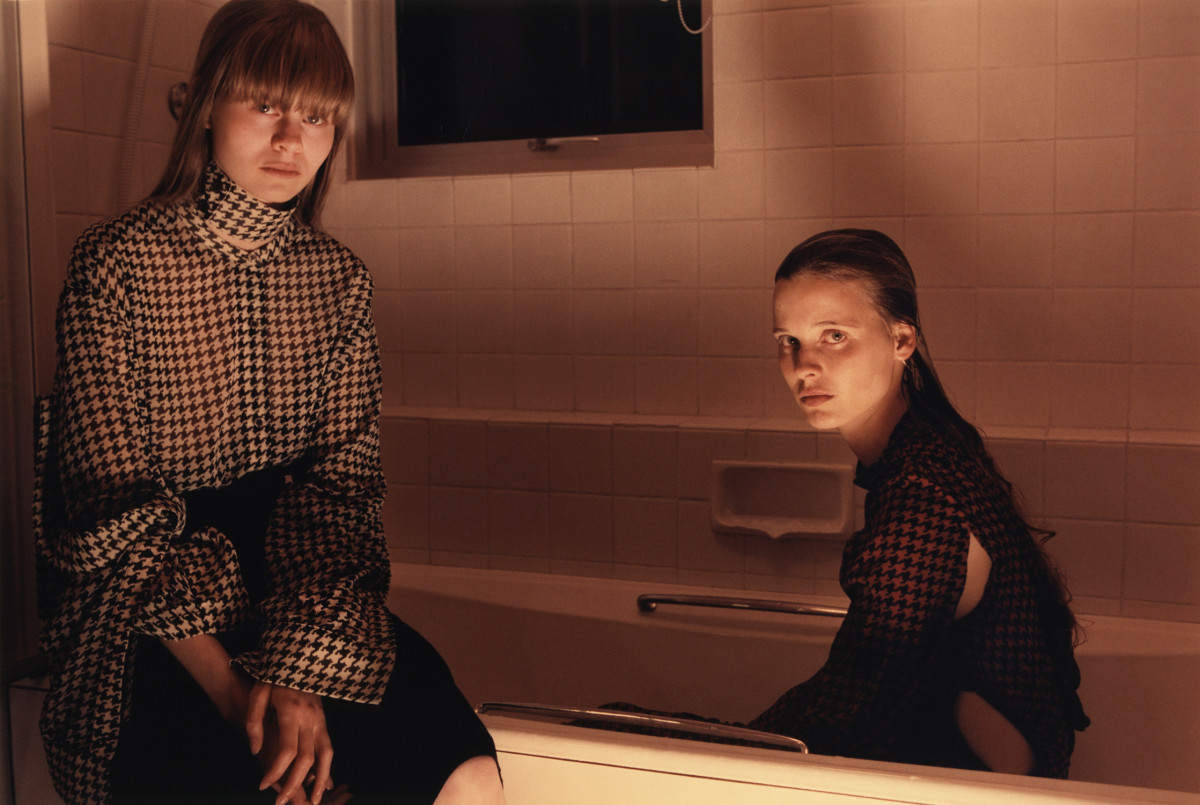 Like the way things break and twist, spatial relationships and fit are a pivotal part of Hwang’s work: “we try to anticipate every movement and think about how the garments can break in a certain way,” said Hwang in an interview with Vogue, published before Hwang had even started planning his Paris Fashion Week debut. And so, the label’s works are produced with great consideration to adaptability – the pants that flare open when the buttons at the hem are released, the exposed backs, the sleeves that diminish and increase at the wearer’s will, the relaxed oversized trench coat, the layers that can be pushed up and pulled down, all things that exist only when their presence is desired, enabling a stylish wearability that fragile, nonchalant youthfulness so requires.

Interestingly, Hwang has produced his own variety of handbags for Rokh (produced at the same factory as Loewe in Spain) including the seasonless signature shoulder bag with four compartments and modifiable pouches, as well as new, smaller versions and a carry-all tote bag for the Autumn/Winter 2019 season, which also introduced the launch of his first shoe styles, that are minimalist yet graceful.

Hwang spoke out on who his customer is, saying that Rokh is a brand for all ages and shapes, stating his aversion to staying within the boundaries of boxed labels with names and numbers of what and who can wear the label’s clothing. He acknowledges the rough edges featured in his work, but then points out the more classic sides of his collections, like the blazers and trench coats. He describes his brand as wanting to give “real” clothes to women – what exactly is “real”, he did not specify, and we can only assume what “real” clothes for women are, be it practical or expressive or modern – and the closest name for a target audience he offered was those who “appreciate quality” yet enjoy being adventurous and bold, which are, undeniably, traits that belong to many women everywhere.

Working at Celine gave Hwang a new perspective on fashion, but he doesn’t want to be seen as someone who tends to the void that Phoebe Philo left – he wants to pave his own artistic path, to create his own narrative and language for his brand, in his own different ways and manners: the brand’s processes, the introspective lookbooks, the plentiful pictures and uploads that attract not only because of the garments, but because of the personality, the artful carelessness, the freedom, and just like that, Rokh is the next – if not the current – best thing.