Renew Initiative: A Future Without Waste

Renew Initiative: A future without waste. Starting with the iconic Chuck Taylor, Converse’s commitment to produce more sustainable sneakers is being realized through “Renew Initiative”.

If you don’t own one, you must have at least heard of it, or know someone who wears it religiously. To encounter at least one person wearing these shoes a day in the banality of everyday life is not quite an understatement. Converse has really made it up there. This Boston-based shoe company has been around for more than 100 years, and has become a subsidiary of Nike, Inc. since a couple years back. Aside from making a name as the “original” sneakers, Converse has debuted many notable designs throughout the decades, but their classic Chuck Taylor All Star canvas shoes are probably one of the most well-known shoes universally, and its quality lives up to its reputation. Although they are originally designed for basketball players, the versatility, function and style of Converse’s canvas shoes continue to remain timeless and managed to become a streetwear staple.

For the last couple of years, more and more brands are joining the eco-friendly movement as waste and environmental sustainability have been a severe issue, especially in the fashion industry. A measure to achieve zero waste, Converse chimes in with its “Renew Initiative”, their most significant innovation by far – upgrading and giving their sneakers the “green” makeover they needed in order to become more sustainable by creating an alternative process that leaves less impact, starting from the original Chuck Taylor.

Being something of an icon and a starting point, Converse’s Chuck Taylor have undergone multiple yet subtle changes and adjustments over the years. Went through continuous reinvention that mainly results in design changes, colors, construction and materialization, this updated Chuck Taylor series had its latest breakthrough “Renew Initiative”, which is about finding a new solution to cut waste using recycled materials, while also giving waste a whole new life with new methods of manufacturing. This latest initiative from Converse utilizes renewable and recycled materials made from post-consumer and post-industrial waste. Some of the ways to produce the new Chuck Taylor All Star pack is through upcycled textiles, recycled Polyethylene Terephthalate (PET) and recycled cotton canvas blends that will all be featured in the series. These new processes that are rethinking waste use 20% less carbon and 30% less water than traditional manufacturing. Renew Canvas, which is the project’s initial launch and a partnership with Thread International, has the same feel and look as traditional Converse canvas but they are made from 100% recycled polyester that came from used plastic bottles. It is said that around 11 plastic bottles were recycled to produce a pair of Renew Chuck Taylor. Renew Denim uses an in-house upcycling process, turning single-source upcycled textiles – such as jeans lifted from landfills, into a Chuck Taylor All Star or Chuck 70. And lastly, Renew Cotton transforms cotton canvas waste to create a composite 40% recycled cotton with polyester to form a new yarn.

Although the idea of this eco-friendly project is to build a better environment for the planet, the palette for the series is far from subdued, plain tones. Converse Renew Canvas are presented in many vibrant colors to encourage its wearer to feel good and confident in what they are wearing, also knowing that they are participating in making changes for the better, for both the natural and manufactured world around them. The colors include Moss Green, Ozone Blue, Wheat, Pale Putty, Black and Jade Stone. The new Converse Chuck Taylor pack might look and feel similar, if not the same as the original, but they are processed continuously with means of giving back to the environment, by “renewing” some of the old ways, or things.

These first few takeoffs seem to be only the tip of the iceberg for Converse as the brand is expecting to hold more of these environmentally-conscious projects in the near future. Finding an innovative approach to lessen environmental damage and have a more sustainable living can start from either as simple as choosing the right kind of footwear, or you could just wait around for the world to miraculously stop global warming by itself. But then again, life’s too short to waste.

The Converse Chuck Taylor All Star “Renew Initiative” pack will begin retailing globally on July 5 and July 19 in Indonesia at Converse Concept Store Grand Indonesia and Senayan City with a price range starting from 759.000 IDR. The first released pack is The Converse Renew Canvas which uses recycled PET, to be followed by Converse Renew Denim Chuck 70 in August, and finally Converse Renew Cotton will be officially released in early 2020.

See the available options for the pack below: 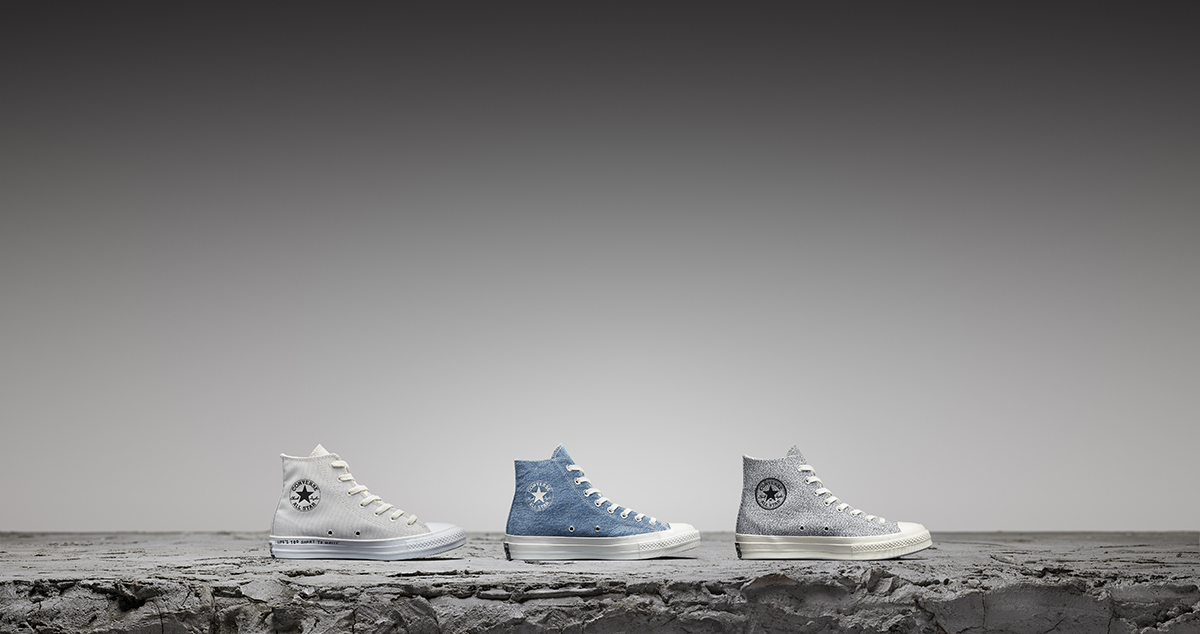