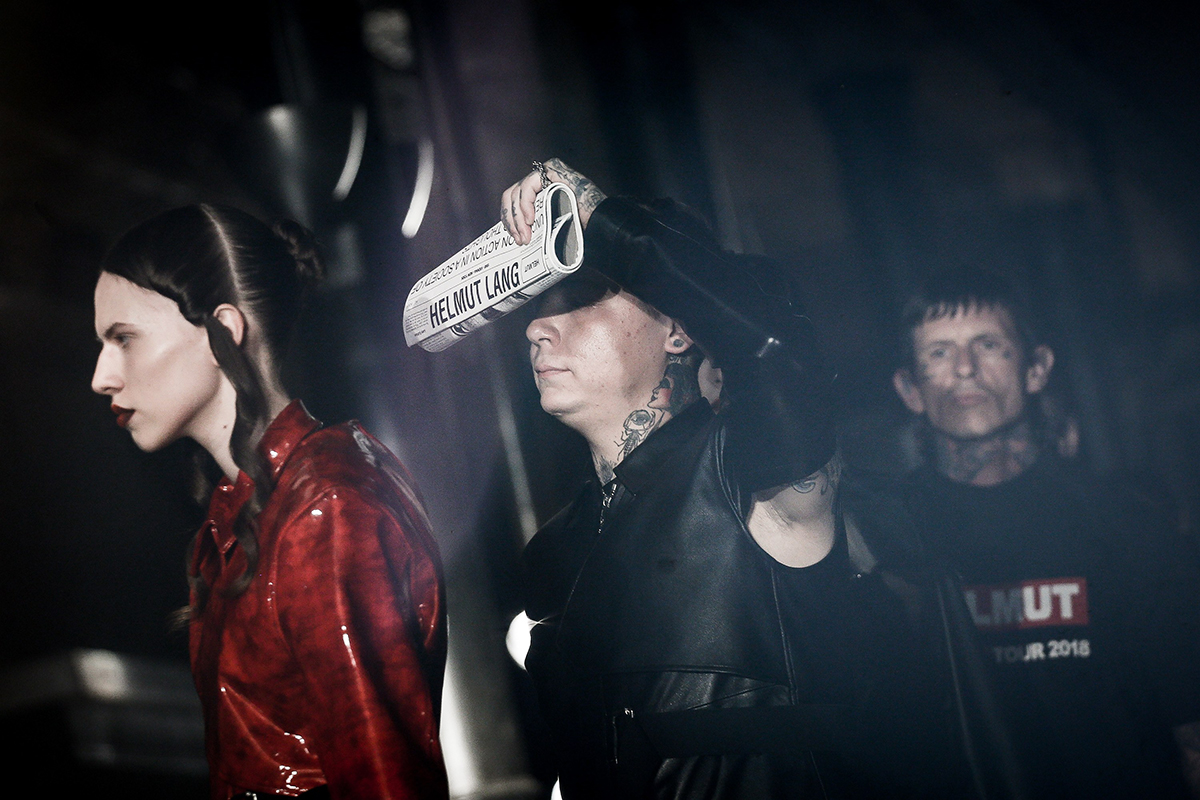 Breathing New Life into the Revived Helmut Lang. Shayne Oliver, of Hood by Air, presented his debut on the most cultishly revered brands in fashion.

In fashion, where hysteria is the dominant mode of expression, coronations can be instantaneous, with new icons minted every season. But even among the greats, Helmut Lang stands apart. For those who followed fashion during his halcyon days in the 1990s and early noughties, his pieces were the stuff of cult fascination.

It’s his energy and spirit that still permeates many other designers’ work (Alexander Wang, Raf Simons, Vetements: many of the most influential names of the last decade borrow something of their aesthetic and philosophy from Lang), season after season – his pioneering minimalism, his interest in the fetishistic, presenting menswear and womenswear together, casting his shows with friends and models of all ages, shooting conceptual advertising campaigns that did not always display clothes – have become standard practice.

Now it’s been 12 years since the designer left the Manhattan fashion scene in favour of life as a sculptor in upstate New York and since then its new designers never recaptured the energy and influence that Lang had marshalled. So finding someone who’d look at this legacy and embrace it rather than be scared was quite the task.

Last March, the brand’s chief executive Andrew Rosen announced that the beloved brand, would be adopting an unorthodox new structure. Rather than tap a creative director, Rosen instead brought on Isabella Burley, the editor-in-chief of London-based Dazed magazine, as Helmut Lang’s editor-in-residence, with a focus on revamping the brand’s digital footprint. In turn, Burley will invite guest designers in-house for a season or two each. Which is where last Monday night’s catwalk show came in, the first in the hot seat, ex-Hood by Air designer Shayne Oliver, presented his take on Helmut Lang.

Oliver, who launched the audacious – but now shuttered – street brand Hood by Air, is a young man with little formal training as a designer but a Mack truckload of ideas. Here, he just took on one of the most cultishly revered brands in fashion and left you thinking: He might be on to something.

As expected, Oliver paid homage with his own bold take on the nineties. From the opening looks, it was clear that the Lang-ian spirit was very much back. The clothes fell away from the body to reveal expertly engineered undergarments, from outsize leather bras to silken garters, held together with belts, straps and chains. The sexuality was both brazen and refined, the more overtly sexual pieces paired with elegant tailoring.

The collection also had some of the most creative accessories we’ve seen in a while, from the perspex briefcases to the newsprint leather tote, or a leather bra you can transform into a handbag, while other carried wore duffle bags, leather utility vests, branded belts and more.

Shane Oliver’s “love letter to Helmut Lang”, as Burley called it, was unmistakably aimed at millennial generation. Hence the strategy behind the relaunch of Helmut Lang: whether it makes a new generation want the Helmut Lang label and logo, as well as the look. And that depends on making the name cool again. So he took action and created a set of “merch” for the brand that displays the word Helmut proudly across tees and hoodies and gain the cash back into the brand’s coffers.

Oliver has noted that he reveres the man whose name is on the label. And he pays homage to him in this collection. But he also brings the Shayne Oliver point of view, in which a gender-malleable zone. It suits the Helmut Lang brand, which always tended toward the androgynous. Without the pressure to speak for the entire company or set its course, he has been given free rein to design a collection to make waves. And for this show, he managed to make a storms.