Essentials: David Bowie ‘The Stars (Are Out Tonight)’ 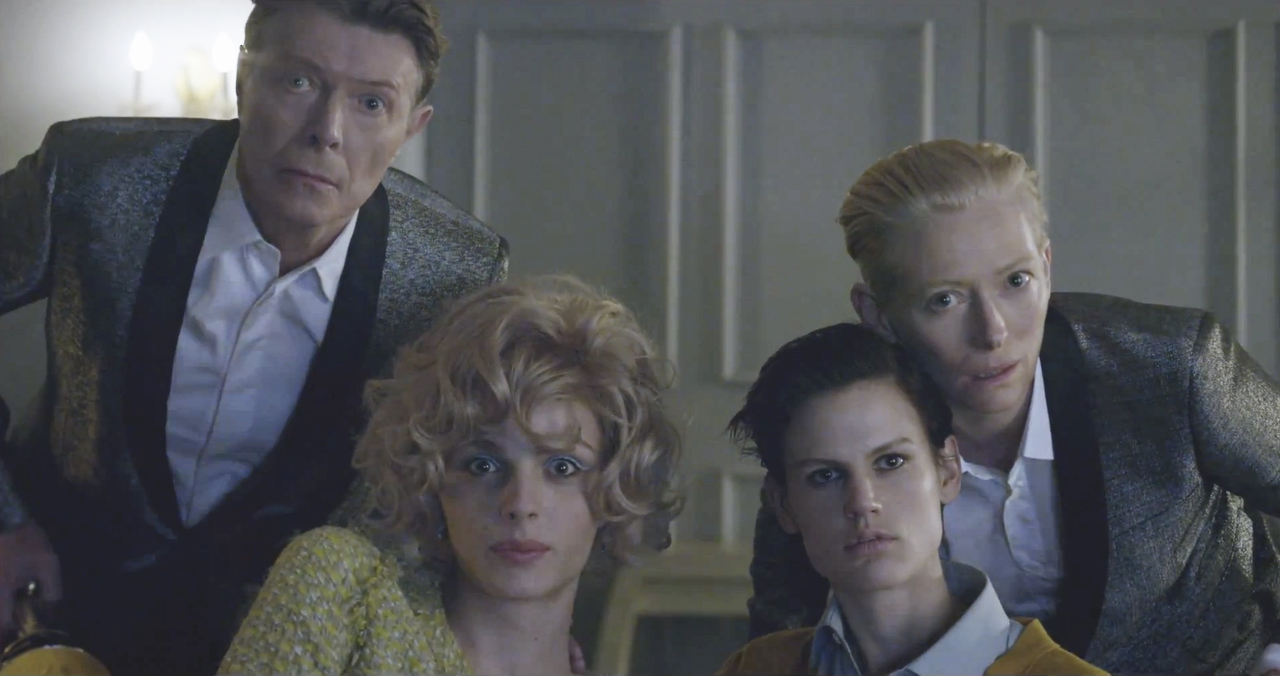 BOWIE RETURNS WITH A ROCK AND ROLL ANTHEM FOR THE AGES IN A STUNNING NEW VIDEO WITH TILDA SWINTON, ANDREJ PEJIC, SASKIA DE BRAUW, AND ISELIN STEIRO

Celebrities aren’t usually the ones doing the stalking, but David Bowie re-imagines the role famous people play in other people’s lives in the video accompanying his new single “The Stars (Are Out Tonight).”

This time, Bowie plays an unassuming citizen in the Floria Sigismondi-directed clip for “The Stars (Are Out Tonight),” with Swinton as his ultra-suburban campily dressed hausfrau. Bowie’s obsession with a pair of celebrities, played by models Andrej Pejic and Saskia de Brauw, haunts him as they literally stalk him around the neighborhood and infiltrate his dreams. In perhaps the most magnetic and poignant role in the video, model Iselin Steiro portrays a young, feminine androgyne version of the superstar (complete with different colored irises), watching the couple’s suburban reality with a sense of creeping terror, and at one point dueting with David through a closed door.

Stylist Jerry Stafford was responsible for dressing the cast of five for the two-day shoot in L.A. Bowie himself wears a McQueen coat, a Lanvin suit, some checks from Kim Jones at Vuitton. Tilda wears a coat from Raf for Jil, some Raf for Dior, some Lanvin, Pringle, and Rick Owens. For the video’s last scene, when they have crossed back to the dark side of fame, Bowie and Swinton are all Hedi-for-Saint Laurent rock ’n’ roll glitz. The succubi sport a smorgasbord of the here and now, from VPL to KTZ.

Directed by Floria Sigismondi and shot by Jeff Cronenweth, the video is certainly a striking piece of work – dealing with androgyny and musing on the meaning of fame, and illuminating the meaning of the lyrics. Bowie’s new album is looking more and more promising, and luckily there’s only two weeks left until it is released. Check back for a review and more Bowie related stories in the coming weeks. (Text Teuku Ajie)