Shiota Chiharu, a Japanese Berlin-based artist known for her immersive and large scale installations, has recently launched the largest solo exhibition of her career thus far at the Mori Art Museum in Tokyo, Japan. Gallery-goers and art lovers around the globe embrace Chiharu’s questioning of several aspects of life, namely “identity, boundaries, and existence”. The Mori Art Museum describes her to possess the ability to “express the intangible”: memories, anxiety, dreams, silence, and more incorporeal qualities.

Entitled The Soul Trembles, Shiota hopes to “deliver to others soul-trembling experiences derived from nameless emotions”. The exhibition is twenty-five years worth of Shiota’s creative work featuring primarily large installations, sculptural pieces, video footage of performances and performing arts-related material referring to the artist’s past work in stage design, photography, and drawings. Epitomising “presence in absence”, presumably alluding to the presence of emotions and experiences in the absence of labelling such emotions and experiences into a specifically boxed category, the artist hopes that visitors will gain a sense of the “inner workings of the soul” and the equivocal meaning of life. 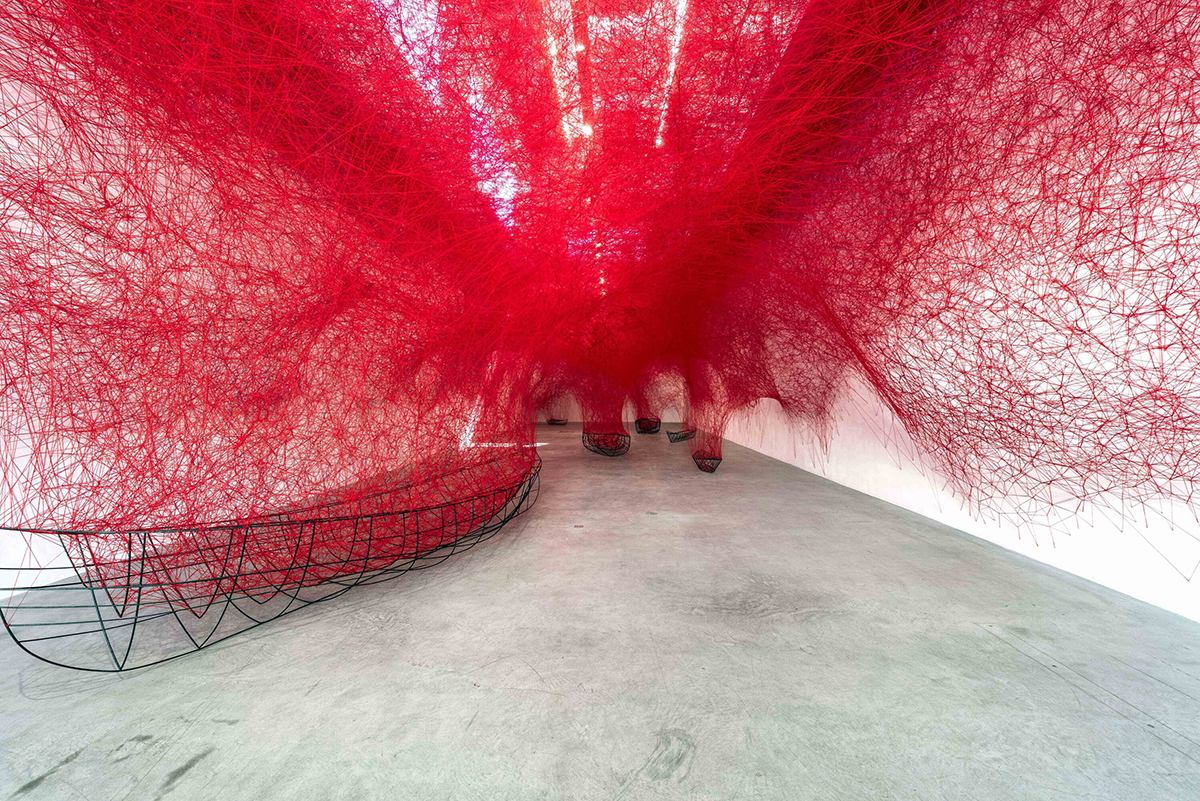 For the majority of Shiota’s installations, the supposed “starting point” is the collection of used objects and possessions. She makes use of old belongings, big or small, two or three or four-dimensional, “haunted with memories”, that all paint a picture of human acts and behaviours. Shiota likes linking and connecting narratives and “creating a visual plane, as if painting mid-air” according to Blain Southern. It’s a great strength of hers, it seems, to be able to project her own sentimental values, memories, and feelings through mere objects in installations huge and minuscule, and allow visitors to recount sentiments and memories and feelings of their own from somebody else’s things. 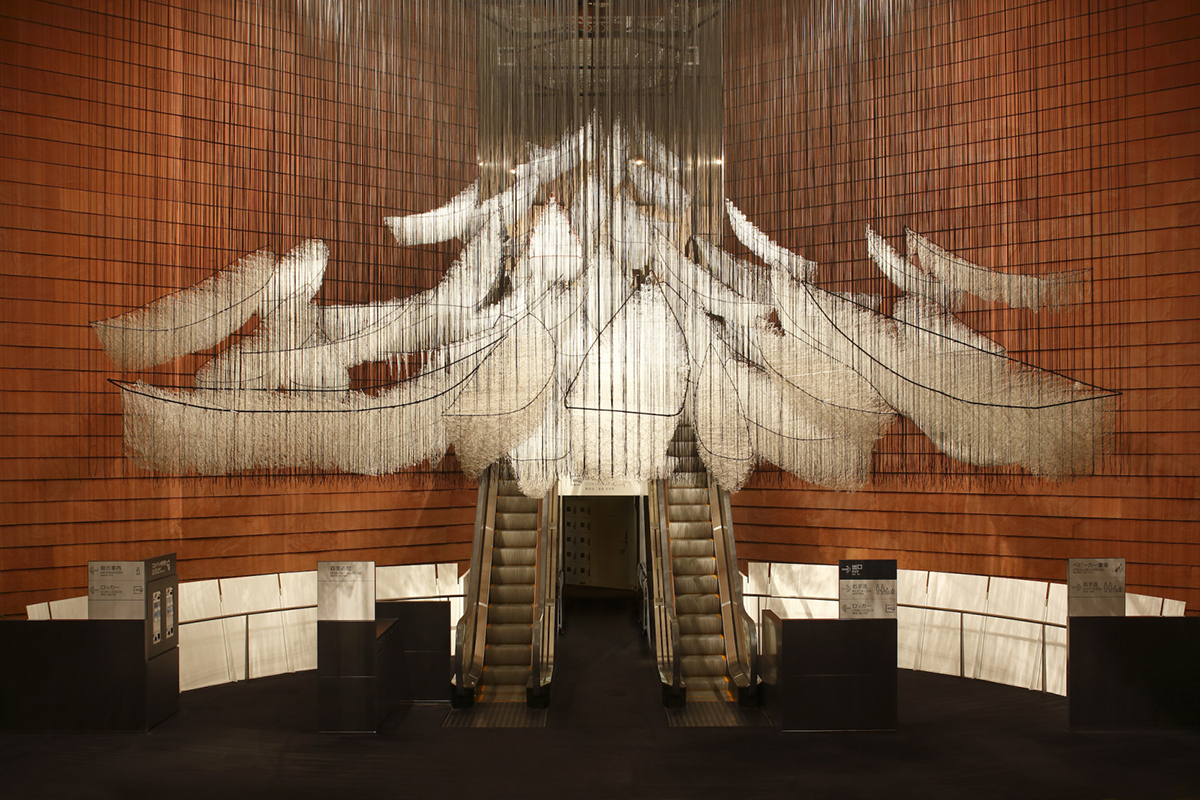 Featured in the exhibition is an entire space covered in strings of thread, red or black, where gallery-goers can walk through and become aware of their surroundings; Shiota’s vision of “experiencing the nameless”. Whether set at ease or unease, it’s an experiential feat. Shiota’s explained that the colour black used in the thread is meant to represent the night sky or the cosmos, and the red thread as blood or the “red thread of fate”, which is thought to bind people together in East Asian beliefs. 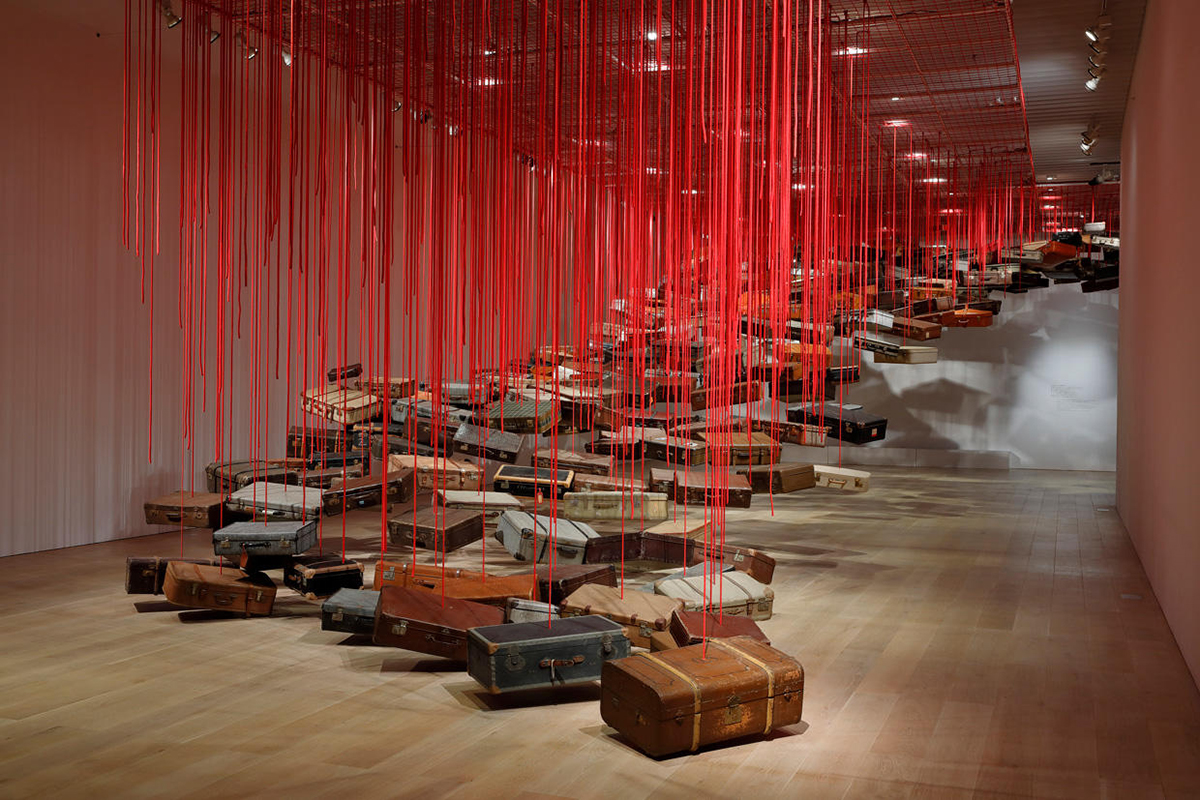 Symbolism plays a significant role in Shiota’s art, and although objects are as ambiguous as they can be, that’s the beauty of it all, the freedom to interpret. One would find themselves in deep bouts of imagining and feeling and just comprehending it all at a Shiota Chiharu display, most definitely. This particular exhibition features objects that convey images of movement and travel, like boats with complex networks of her signature red thread springing out and connecting to each other in a grand manner, and countless numbers of floating luggage hanging from the ceiling, and an ashen burnt piano, evoking silence. Other works displayed include the piece “connecting small memories”, which literally feature miniature figures of people and clothing and furniture; “inside – outside”, a wide installation made of stacked glass windows; and black-and-white photographs woven by the red thread, piled in a suitcase: “where to go, what to exist”.