Designer Artisans Whitaker Malem on the Fetishization of Craftsmanship

Designer Artisans Whitaker Malem on the fetishization of craftsmanship. The British design duo has constructed everything from Christian Bale’s Batsuit to the intricate, fetish-inspired mannequins at the new Christian Louboutin exhibition in Paris.

Women aren’t alone in coveting Christian Louboutin’s iconic red soles. The late Kobe Bryant was a self-professed fan, and Houston Texans QB Deshaun Watson made headlines when he turned up at the 2017 NFL Draft in the designer’s $1,995 Dandy Pik Pik smoking slippers, embellished with the spikes that have become a signature of a Louboutin men’s shoe. In celebration of his creative mind, the Palais de la Porte Doree will be hosting an exhibition titled L’Exhibition[niste] from Feb 26 to July 26 to chronicle his extensive and diverse sources of inspiration.

Not only does the exhibition showcase over 400 pairs of shoes — everything from fish-inspired pumps to vertiginous stilettos more akin to sculpture — but it brings together a remarkable collection of artists and artisans, who have been commissioned to create the scenography. These include director David Lynch, Pakistani artist Imran Qureshi, Spanish choreographer Blanca Li, revered stained-glass artisans Maison du Vitrail and Whitaker Malem — a London leathermaking duo who you’ve probably never heard of, but whose work you’ve definitely seen. 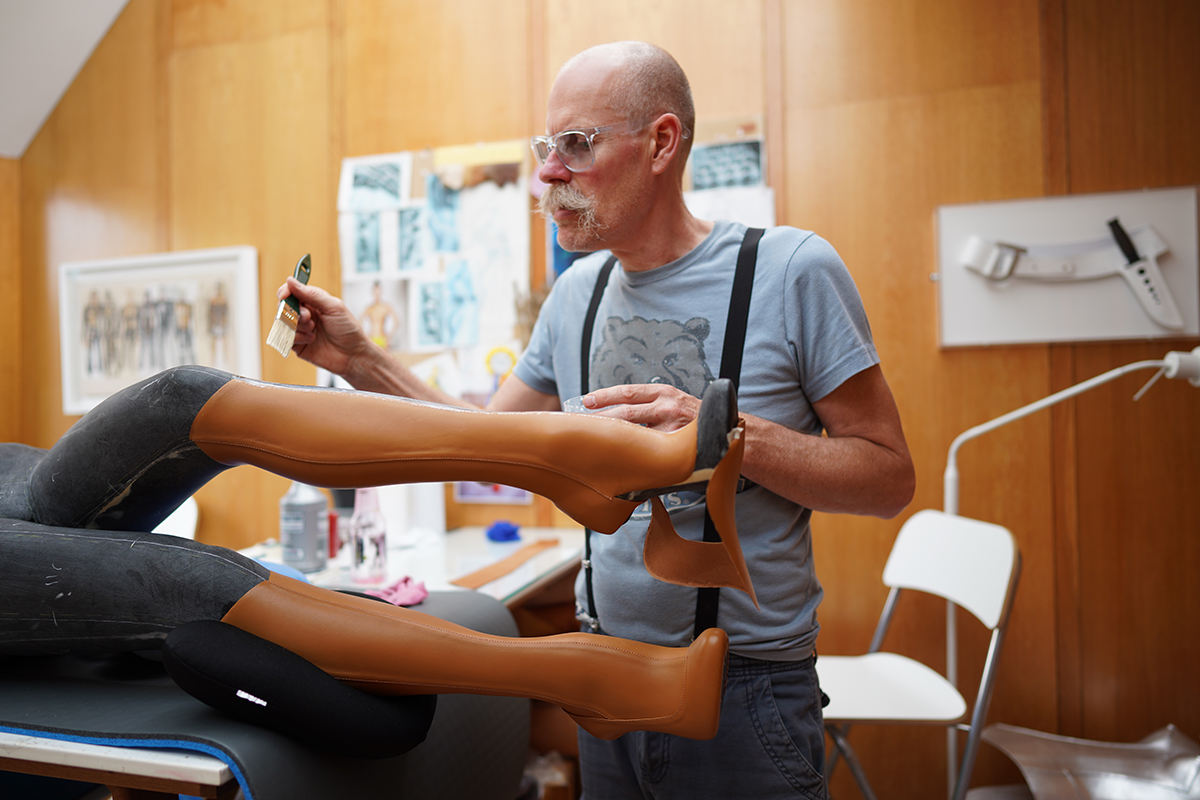 Behind the scenes in the Whitaker Malem studio

Having produced their own collections of sculptural leather garments, the duo went on to create catwalk pieces for designers including Alexander McQueen and Hussein Chalayan. In 1995 they established a technique for the sculpting and leather covering of torsos/bodies-which they subsequently developed. For 20 years Patrick and Keir have collaborated with artist Allen Jones creating leather-covered sculpture using this technique. Whitaker Malem have worked extensively in the film industry for over 15 years creating principal costumes for movies including Die Another Day, Eragon, The Dark Knight, Captain America: First Avenger, 300: Rise of an Empire, Wonder Woman, and Aquaman. Based on Patrick and Keir’s accumulated experience in art, fashion, and film, their current works explore sexuality, the sexed body, and gender identity. “The secret of our technique is that for everything that we make there is a block,” explains Patrick. If the finished leather pieces are like a “a shoe for the body”, then these sculpted figures are like lasts — the foot-shaped wooden blocks around which footwear is constructed. Patrick actually started out with a footwear bursary in 1980 before moving on to fashion design at Central Saint Martins. There’s a nice symmetry, then, in Louboutin inviting Whitaker Malem to create nine life-size, stiletto-heeled mannequins — based on 3D scans of one of Louboutin’s muses, the French singer Arielle Dombasle — for the ‘Nude’ section of the exhibition. The figures are made in varying skin tones and posed among vitrines holding other shoes in an even wider range of fleshy shades (Christian Louboutin was a pioneer of broadening the concept of ‘nude’ by creating a diverse spectrum of shoes in varying skin tones in 2013). 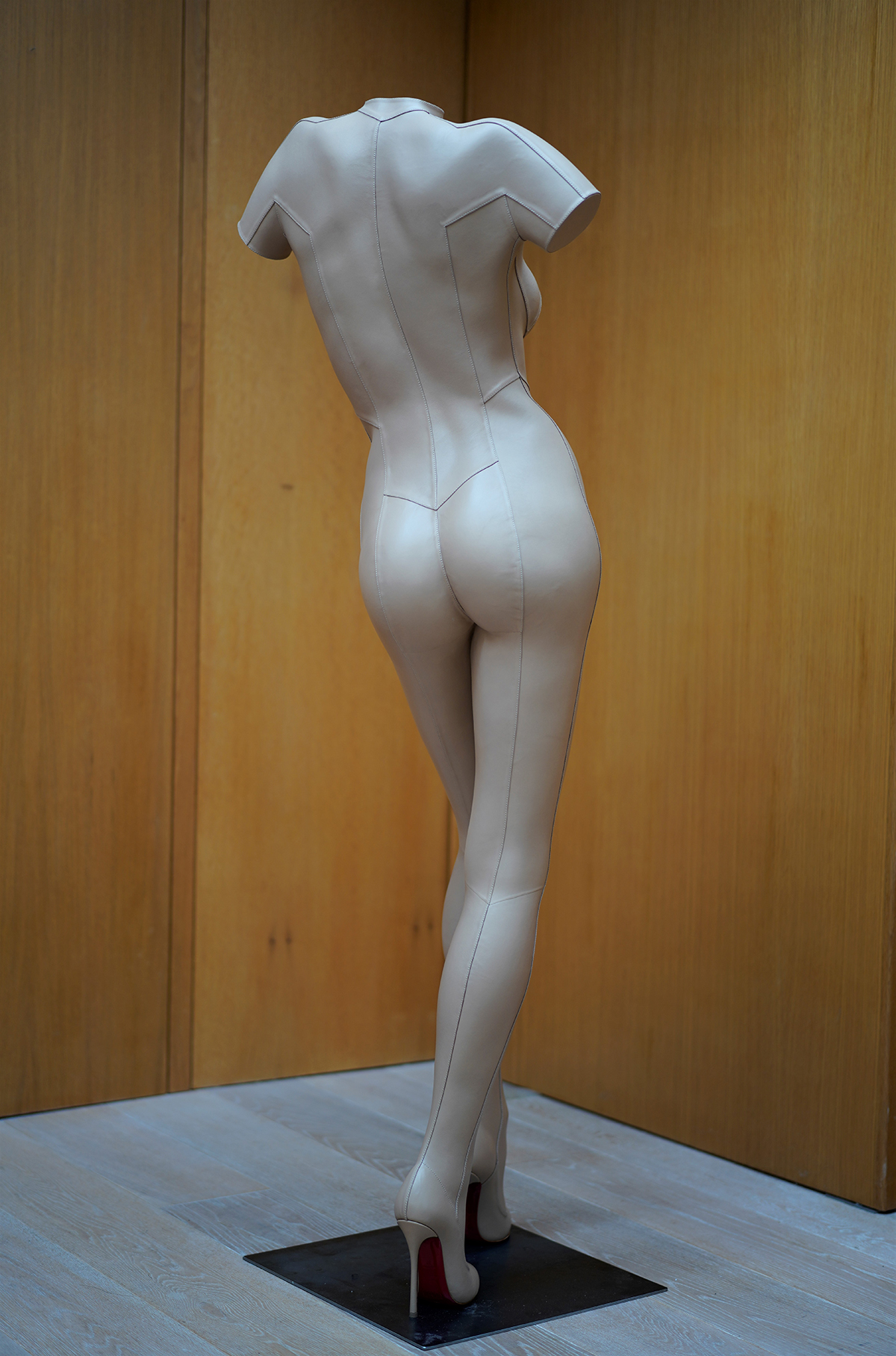 The collaboration came together because someone at Christian Louboutin once worked at Alexander McQueen — where McQueen introduced him to Whitaker Malem, who came to see the duo in Dalston and was blown away by their work. “He sponsored us for a year to do this and enabled us to produce this work, which is horribly time-consuming and actually couldn’t be done under pressure or farmed out,” says Patrick. “We know one other person that could help us do this with us on the planet. And they’ve only just become available and they haven’t done it for a couple of years. It’s really at that level.” 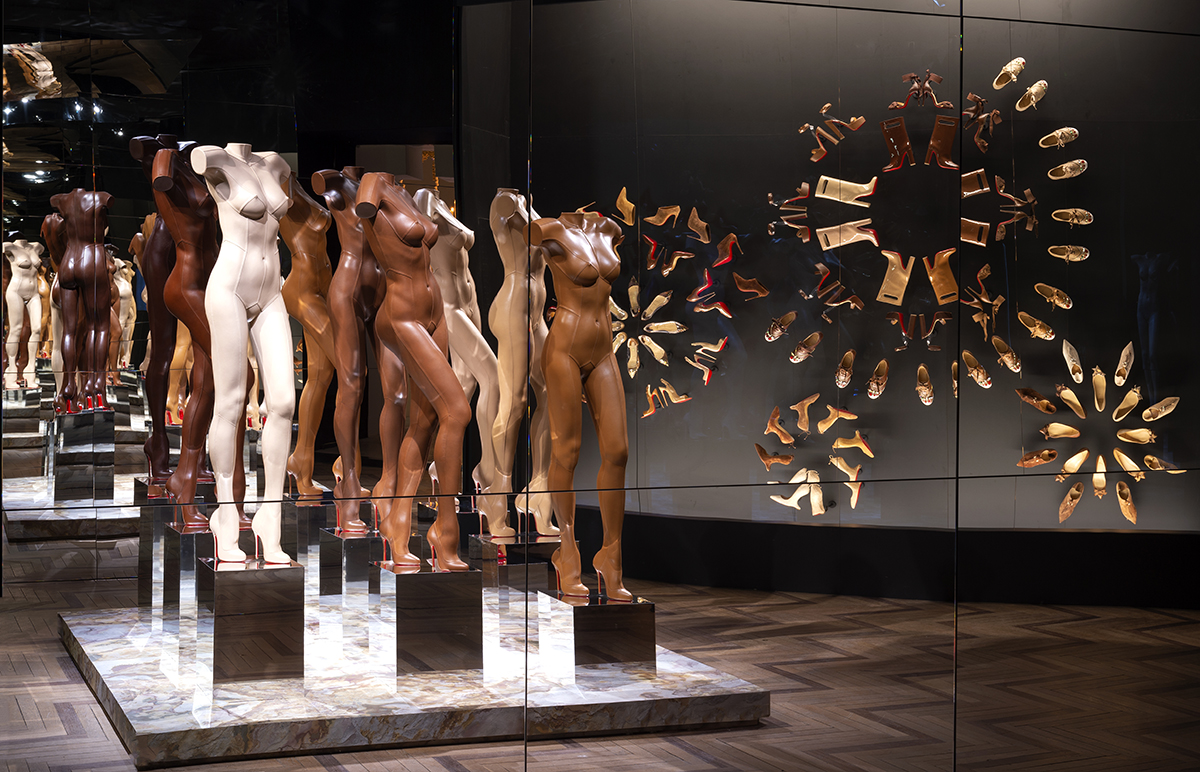