Samson Leung knew ever since he was a little kid that he was interested in the creative industry. His passion for creating wearable “sculptures” for people led him to London to learn from other creative people. He recently earned his BA in womenswear from Central Saint Martins, London and will continue his fashion education there this October.

For his final project, Leung created a unisex collection that was shown in Central Saint Martin’s press show that was also live showed on Vogue Italia. His collection, “Dear you, he said” was a moving (catwalk) gallery that explored the narrative he created within the mood films he shot in Hong Kong and Tokyo. With the inspiration of the granular texture from the films, he developed his own slime material. It was a malleable material that when it’s cool, it stayed stiff but when it’s steamed, it’s soft as leather and could be molded and stitched. He also developed an oil paint transfer technique that allowed him to build layers of colors and opacity and transfer them onto the surface of any fabric including his slime.

To learn more about Leung as well as his fascinating work, we recently conducted an interview with him. Read on to find out more about Samson Leung’s fashion journey and creative world!

Can you share with us a little about your background/childhood?

Samson Leung: I was born in Taiwan and raised in Hong Kong. I grew up in a family that worked in the entertainment industry. My father is a director and producer in Beijing and my mother used to be a model in Hong Kong. I was often surrounded by actors and actresses as a kid, especially when I spent time on film sets. Hence moving images and film play a big part in my creative processes.

Why did you decide to continue your education in London, and specifically at Central Saint Martins?

Samson Leung: Hong Kong is an amazing multicultural city where you can literally meet all sorts of people, but it isn’t really the place for creative people, especially young designers. I knew very early on that I wanted to study fashion because it allowed me to basically create a wearable “sculpture” and put my interest in crafts into use. CSM was well known all over the world, I heard a lot about it through creative people around me as a kid. Hence, I decided to go there. London itself is packed with artists and designers like me, literally collaboration opportunity at your doorstep! There is just so much more appreciation and support for young designers there. 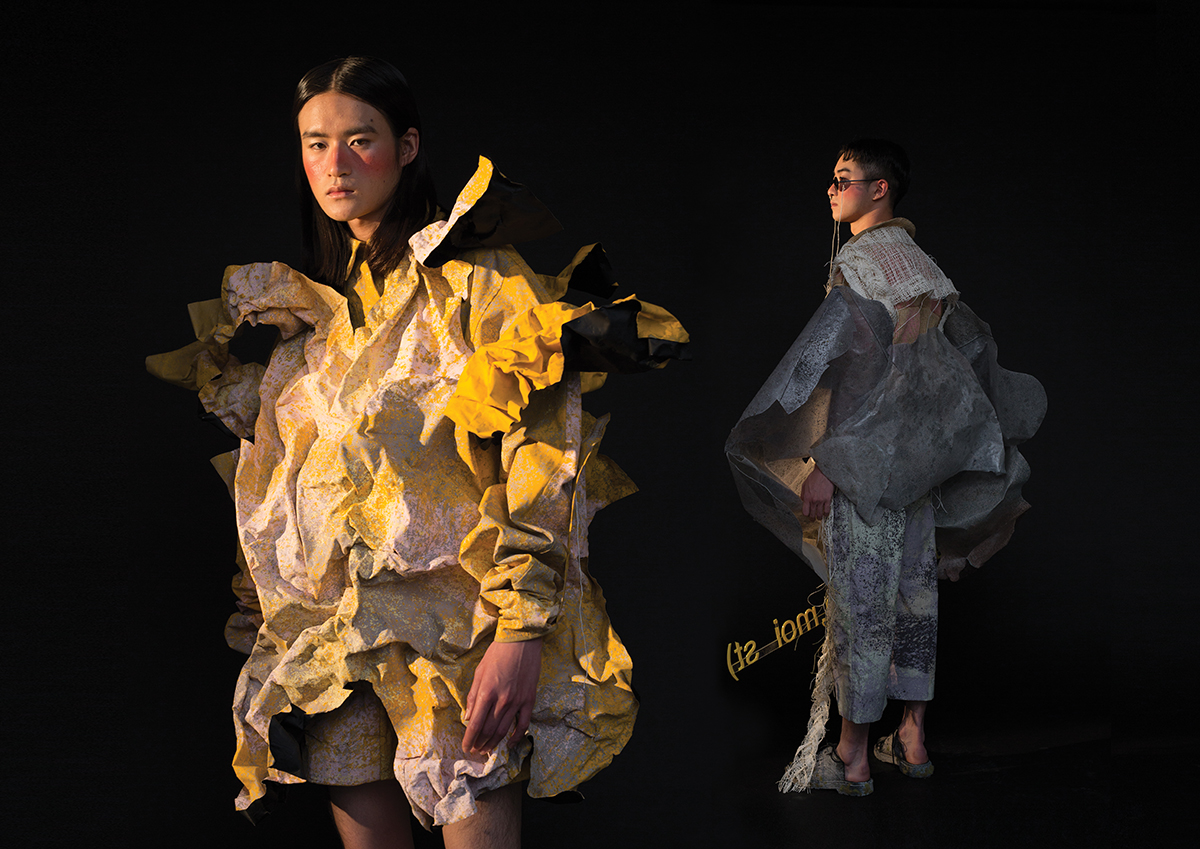 You’ve had many working experiences in the past, which one of those many experiences did you enjoy the most and why?

Samson Leung: Probably my time in Japan was the most enjoyable. Having worked for both Writtenafterwards and Taro Horiuchi gave me so much creative freedom to design my products. I got to throw a cardboard on the street, tore and wrecked it to create texture before transferring it into a print for sweaters, as well as designing a virtual world with spacecraft as a print for a bag. But really Japan itself was just amazing, my time there was incredible as I got to meet so many creative artists and designers, enjoy the crazy nightlife and explore many hidden gems only the locals knew about!

Have you ever had any challenges in the past that made you doubt yourself as a designer? If yes, how did you overcome those challenges?

Samson Leung: It’s actually quite funny, as a kid my parents were absolutely against what I wanted to do. My mother wanted me to be a businessman and my father wanted me to follow in his footsteps as a director. However, back then I was so confident I didn’t have any doubts, until when I got into CSM. Imagine a bunch of elite art students from all over the world gets thrown into a room together to create work. It was definitely stressful, I went from feeling really confident to feeling like I was at the bottom of the class. But whilst feeling all that, I appreciated the fact that I got to work and surround myself with all these amazingly creative people. They made me work harder and put more focus on my work.

How have your experiences as a designer shaped you into who you are today?

Samson Leung: I am a perfectionist, hence I’m never 100% satisfied with my work. It motivates me to create better work and I guess that applies to my lifestyle as well, to push forward to become a better version of myself.