Heritage, Folklore, and Hybridity: The Force Behind Azura Lovisa

Heritage, Folklore, and Hybridity: The Force Behind Azura Lovisa. We talk with designer, Azura Lovisa Wännman, about her creative process behind her label and what shaped her designs into what it is today.

By using essences of Southeast Asia’s traditional visuals and implementing Scandinavian design methods, Azura Lovisa creates garments that are timeless and modular. As a label that creates slow fashion and is keen on ethics and sustainability, their samples are made using leftover fabrics from past collections and various textiles the brand has collected.

The label’s pieces are rooted in storytelling, with the designer herself being strongly interested in traditional mythology. She also explores the rituals and culture from her mixed Malaysian-Swedish heritage, with her recent collection referencing bits and pieces from the traditional folk dress but interpreted with contemporary ease. The designs are tough yet feminine, utilitarian yet graceful. Strong silhouettes and tailoring, combined with breezy, flowy ends are common elements that are seen throughout their latest collection. We’ve got the chance to talk with the designer herself and delve deeper into her background, her creative process and how her heritage, her interests, and how her experience has shaped her and her label. Read all about it in our Q&A below!

Can you share with us a bit about your background?

My mother is Malay and Peranakan Chinese, from Johor Bahru, and my father is Swedish, from a small town in the north. I was born in Umeå and later moved to Stockholm, and when I was seven we moved to Miami, Florida. I grew up there, and its multiculturalism and tropicality probably shaped me more than any other place, even though I have a deep connection with Sweden, with nature, and the landscape itself. My Asian heritage is the part of my identity I am still learning about – how I can claim those parts of myself and what they mean to me. My Malay and Peranakan identity is partly locked away from me because I don’t speak the languages. But I am so proud that I carry that heritage in my blood, and it’s a lifelong act of discovery.

How was it like growing up in between two cultures with heavy heritage?

My parents always made sure to raise me in a way that exposed me to not only their respective cultures but to as much of the world as possible. My mother was an international flight attendant for Saudia Airlines for 15 years, and my father was a DJ who took up residencies in places like Kuwait, Cairo, and Bangkok. They always prioritized learning about and engaging with other cultures and ways of life. Because of this, it never felt like there was tension between the Malaysian and Swedish parts of my heritage. Hybridity was always treasured and encouraged, and no traditions or expectations were ever forced on me – I was given the freedom to explore what my heritage meant to me, what was important for myself to navigate, and to guide my own self-discovery. I’ve never felt rootless or displaced, only nourished by my heritage. 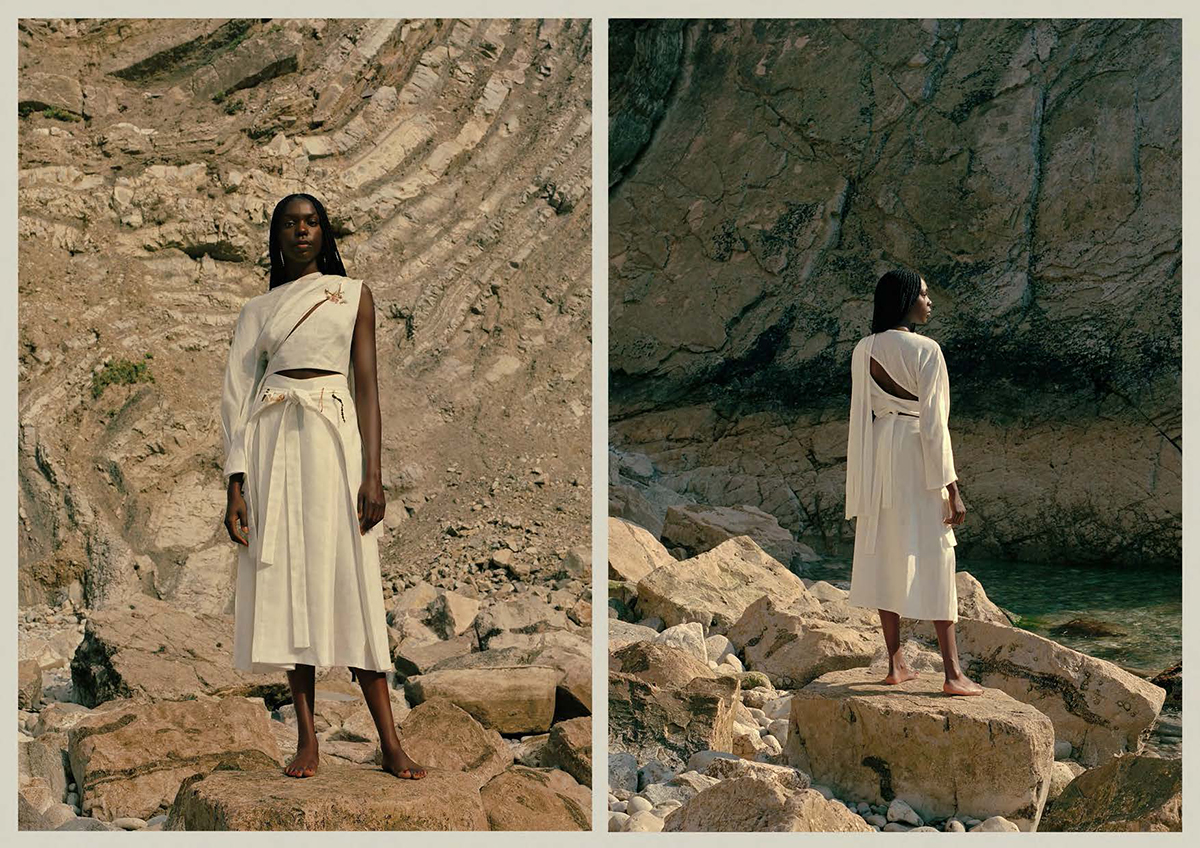 You’ve also had experience working with Balenciaga and Peter Pilotto, how did that experience shape you into the designer you are today?

Experiencing two brands operating at very different strata of fashion – one a Parisian design house with a legacy, and the other one of the most successful brands of London’s young fashion scene – was an incredible education. I’m an only child and working independently was always more natural to me, but working for these labels taught me how fulfilling and exciting being part of a team can and should be. I really admire what Peter Pilotto built and the way they steered their ship; they have paused their brand now, but they had an amazing sense of commercial appeal and really knew and loved the women they dressed. Balenciaga on the other hand was a dream come true; it was the fashion house that influenced me the most in my youth. Unfortunately, I missed Ghesquire by a few years – I was there in the Wang days. I have so much respect for the people in the ateliers who dedicate their lives to their craft, and the designers who collectively imagine whole worlds. The experience was very affirming for me that I had a place in the industry and that I deserve to be here, which is something I have to remember as I run my own label. It says that you’re based between London and Miami. Do you think that being based in two locations has affected your design process? If so, how?

Definitely – the two places are home to different versions of me, with quite distinct aesthetic languages and which represent different mindsets and lifestyles. Both cities are incredibly multicultural and international – almost nations unto themselves in a way. There’s a charged amalgamation of diverse influences and pop culture. Miami is a Latinx, Caribbean, Black city, an oasis of tropical energy. As a vacation destination, it has this dual identity to grapple with. How does the city present itself outwardly and what is it to those that make their lives there? Miami taught me how to design in a way that celebrates the multifaceted nature of people, and how to embrace sensuality and the body. London has a lot of similar elements, including this status as a world destination, and a strong Black, Caribbean, and Asian population which has made the city its own. As a third-culture kid, growing up surrounded by cultures other than my own was what made a place feel like home; there was comfort indifference. It’s part of how I think, navigate life, and ultimately how I design. It’s in these points of convergence, in the tensions and the flows, the collisions and the collaborations, that new exciting things emerge.

Your design is said to be rooted in the essence of storytelling, rooted with an interest in histories, folklore, and mythology. What sparked that interest to delve deep into those fields?

Growing up in northern Sweden, in an area very close to the forest and wilderness and fed on tales of river spirits and trolls, I was quite affected by this hidden reality just beyond the trees. I used to wander around in nature and just be in my head, completely lost in fantasy. I was fascinated by folklore and Norse mythology. And my mother used to read to me from a children’s book of Malay folk tales and tell me stories about jungle spirits. Magic just seemed to run through everything and I never lost that belief. I was an only child and spent my entire childhood in my imagination. I used to make books and even websites with whole worlds in them. As I got older it just shifted more towards real stories, real lives, and the potential of elevating these narratives to the realm of mythology, deserving of the respect with which myths were preserved in the memories of the people. These forms of storytelling are models for making new legacies. I think it’s important to create new mythologies, to create our meanings and symbols and worlds, sometimes in resistance to the pressures of reality, which can be destructive and, with the state of the world, quite suffocating. Storytelling is a form of dissent, it’s a way of asserting our centrality and agency within narratives and countering dominant narratives that perhaps would write us out of the story if we didn’t use our voices. 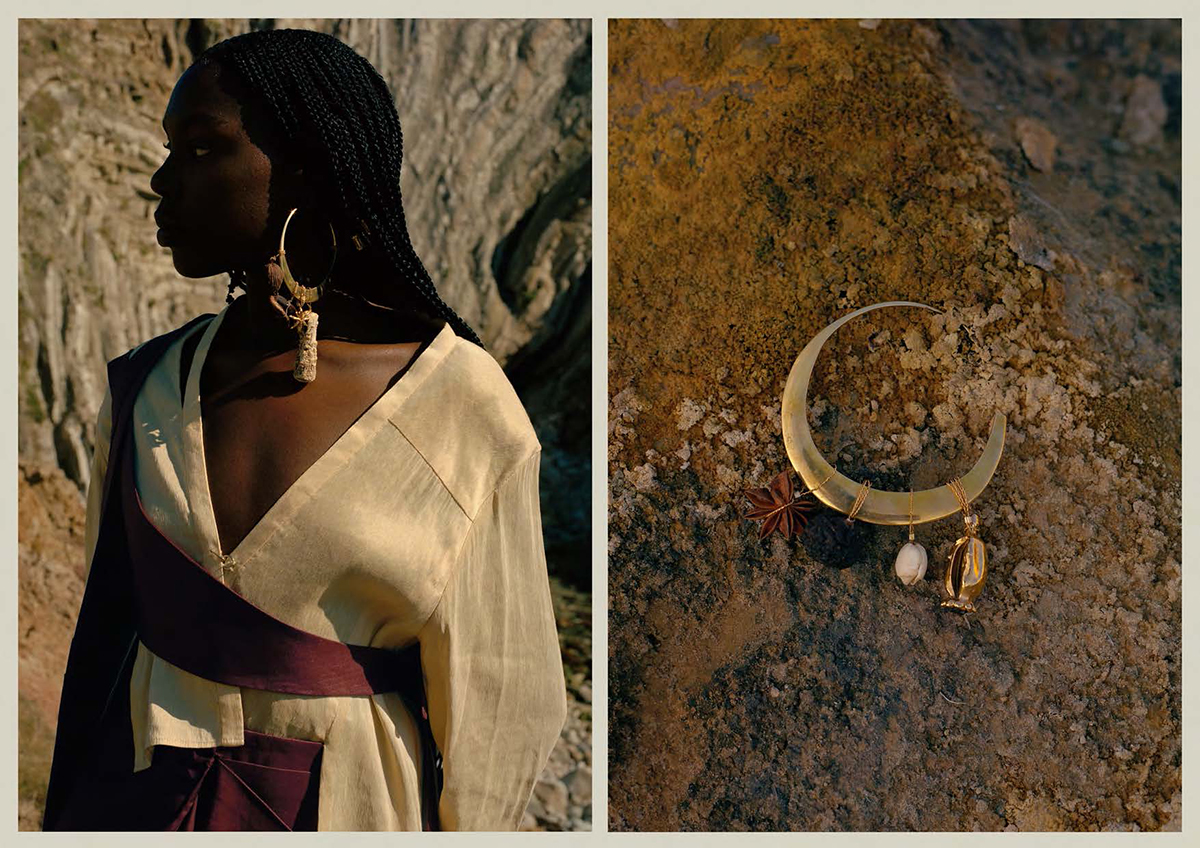 My mother is of Malay and Peranakan Chinese heritage, and as I got older I got more curious about this mixed heritage and all the wonderful complexities within the cultures. I’m in awe of arts and crafts as diverse as the elaborate work of blacksmiths who create the beautifully curved daggers called keris, the ancient tradition of wayang kulit shadow puppetry where intricate figures are cut out of animal skins, traditional Malay shipbuilding and kite making, and textile traditions like ikat, batik, and songket weaving with all its symbols and iconography.   Shamanism could perhaps be considered an art, when you consider the careful crafting of spells and the carefully considered and highly aesthetic arrangements of objects and entities in a room as part of a ceremony. Peranakan glass beadwork and mother of pearl inlay are also breathtaking. It’s interesting to see how you interpret heritage and culture into your designs yet your collections seem very much current and modern. Do you think fashion is a medium in which young creatives can keep their heritage alive?

Fashion is one of the most vital mediums for channeling our heritage because it is built on tradition – whether it takes inspiration from it, or positions itself in opposition to it – but is woven into our contemporary lives in a way that many mediums are not, because of how we attribute it to our sense of identity formation. Fashion is an engine of culture and aesthetic modes and reflects society in real-time. The current wave of young designers investigating their heritage in intelligent and sensitive ways, instead of the sensationalized theatricality that is sometimes applied to so-called “ethnic” inspiration, is really amazing and shows that keeping heritage alive doesn’t have to mean preserving it in some stagnant state which is incompatible with contemporary culture. We can consider fashion as a vehicle for engaging with lived realities, tracing transnational cultural flows. 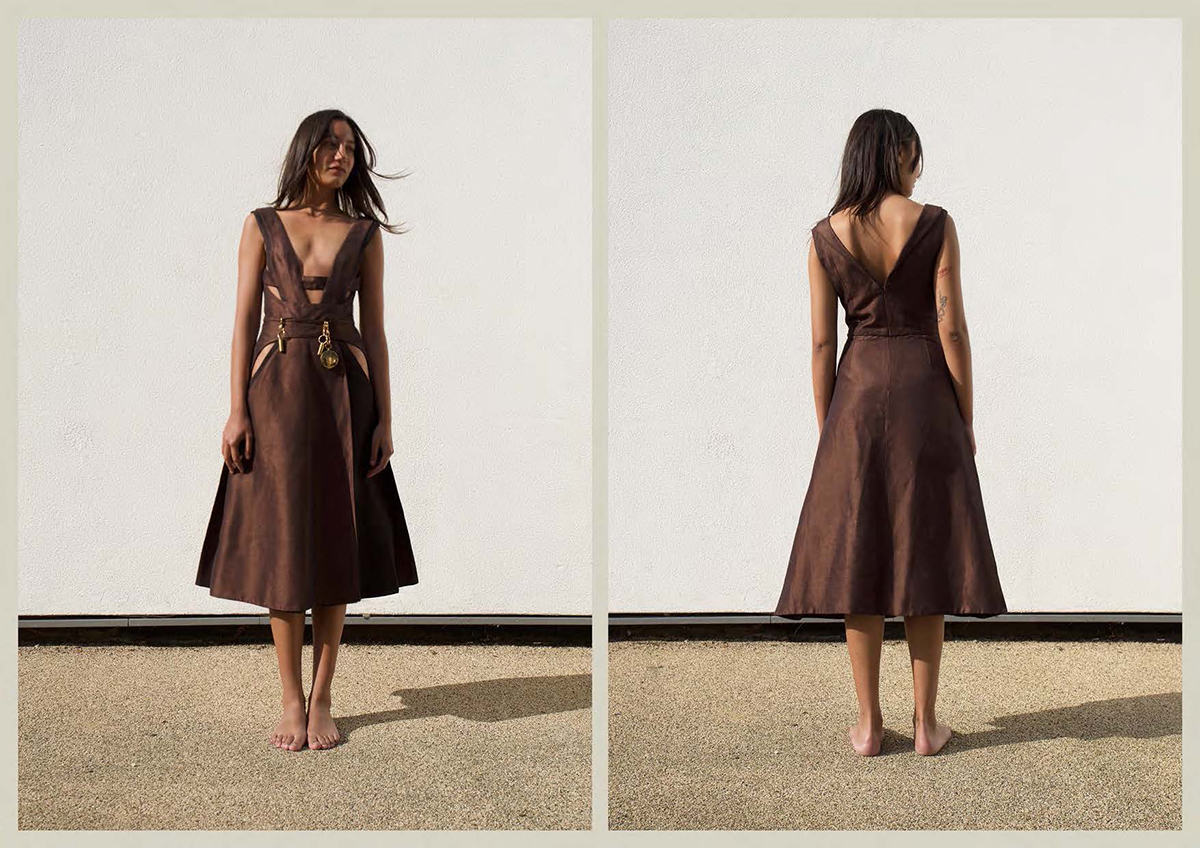 In this collection, is there a piece you’re particularly proud of?

I am proud of the two tops made with the traditional Malay checked silk songket, because I’ve been collecting the fabric for a few years and never had the chance to really work them into a collection. These cloths usually come in fairly short lengths as they are very time-consuming to weave and require a lot of skill – I had the opportunity to observe a woman in the process of weaving them on a traditional loom when I was in Malaysia earlier this year. Songket is usually saved to be worn for special occasions. I wanted to share their beauty because Malaysia’s textile industry isn’t very well known internationally. It’s a point of pride to be able to feature them in a contemporary design and show how they can be worn beyond convention. 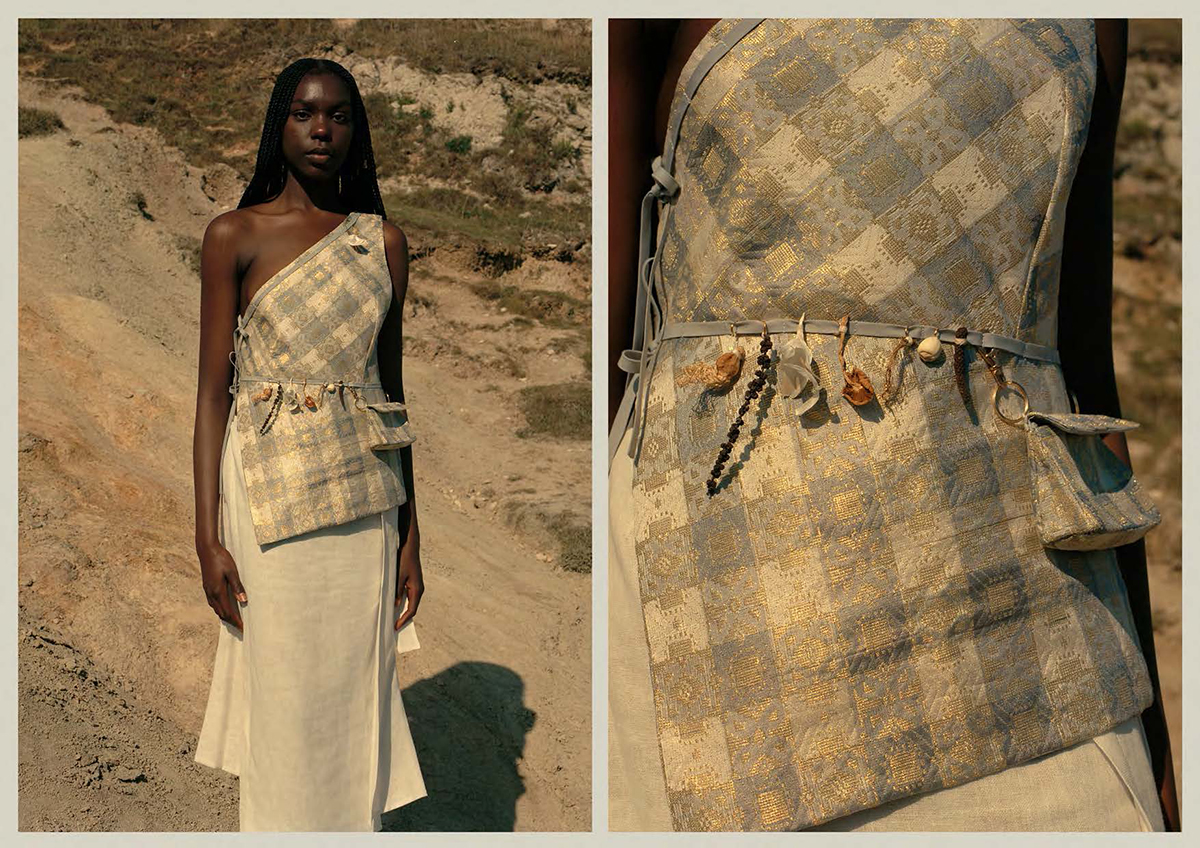 What do you hope to achieve in the next few years, and what can we expect next from Azura Lovisa?

I hope to eventually expand the label beyond fashion and integrate it into a broader practice that encompasses art, other areas of design, writing, and publishing, and filmmaking. But that’s a long-term goal. For now, I would be happy to dress interesting people internationally – if I knew someone in Singapore or Delhi or Doha was wearing my clothes I would feel accomplished. I also recently did my first costume design gig for Akinola Davies’ upcoming sci-fi short X Us, and would love to move more into costume. But ultimately, if I can make a living from a practice of making beautiful things that make people feel seen while thriving in a space where I can research and test ideas and there’s an audience for it, that is an achievement for me. (Text Vanya Harapan)