Why Everyone’s Talking About Everything Everywhere All at Once

Why Everyone’s Talking About Everything Everywhere All at Once. A movie that touches upon asian american upbringing, generational gaps, sexuality, with some multiverse fun.

As we enter the halfway mark of 2022, Everything Everywhere All At Once has solidified its spot as one of the most talked-about movies this year. Not only has the film garnered a massive buzz, the movie also has numbers to back up its success, taking home $52.2 million after 13 weekends in box offices around America and $80.9 millionin box office openings worldwide that are still ongoing. Not only is it highly enjoyable for the average movie-goer, but majority of film critics have also reacted positively to the movie as it receives a high 95% ratings in Rotten Tomatoes.

It’s not often that such a hyped up movie has almost everyone agreeing that it’s a great movie, and it’s also a rare instance for a movie to gain this much success without it being part of a franchise. Despite the film being an A24 movie, the amount of influence the status of being ‘an A24 movie’ isn’t this massive to cause the success and widespread popularity that the movie has received. It’s even rarer that such a success comes to a movie who’s storyline and characters aren’t based on a pre-existing piece of work.

The story that the movie tells is an original one written by the directors themselves. The writing process for the movie started around six years ago when directors Dan Kwan and Daniel Scheinert, aka the Daniels wanted to tell a tale about the generational gap that happens between an immigrant and their first-generation child, a phenomenon that has become a common experience in current times.

“As we were exploring that, I was (doing) a lot of self-reflection on how I was raised, the types of people I was around, and how the Asian American community has a very particular way to deal with the tension that comes from a queer child coming out to their parents,” says Kwan to USA Today. 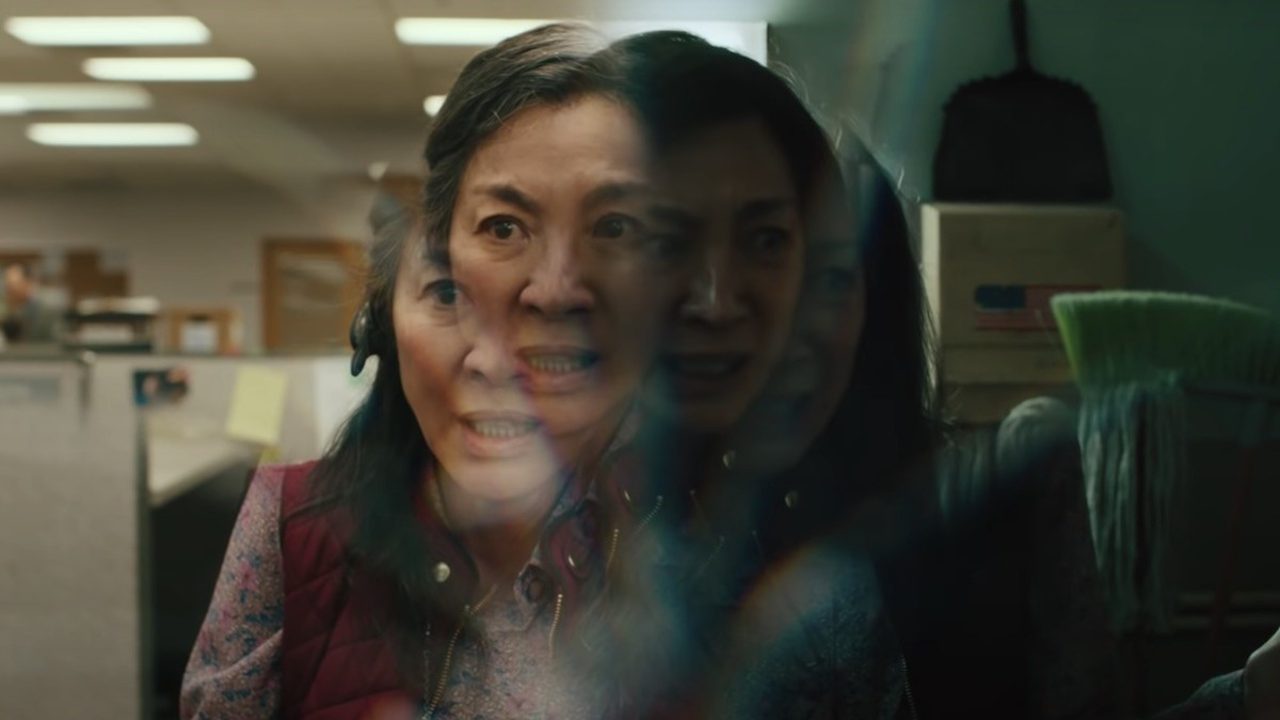 Image courtesy of A24.

This concept of navigating and trying to build a seemingly impossible bond between a parent that feels like they came from an entirely different world is one that resonates through audiences all over the world. Not only that but a key part of the movie’s plot revolves around how Evelyn (played by Michelle Yeoh) struggles to accept her daughter, Joy’s (played by Stephanie Hsu), sexuality, as she tries to introduce her girlfriend to her grandfather in a family event.

The topics of cross-generational struggle and the difficulty that queer youth face as they try to come out to their loved ones is one of the key factors that made this movie an emotional one to most audiences. The story has touched so many hearts that a survey done by Postrak near the film’s initial release shows that 46% of the audiences got a ticket for the film purely because they heard it was good. Despite both issues being heavy subjects that are usually discussed or brought up in a serious and grim tone, the Daniels have succeeded in making the tale just as absurdly entertaining as it is heartwarming, making it easy to digest and moviegoers will still leave the cinema with a pinch of fun.

The movie also touches upon the theme of a multiverse, another concept that has been rising to popularity in recent years — think “Spider-Man: Into the Spiderverse”, “WandaVision”, “Spiderman: No From Home”, and the recent “Doctor Strange in the Multiverse of Madness”. The concept of the multiverse is all about how there are other versions of our reality out there that take place in parallel to ours. Although the concept itself seems abit too fictional, seeing a regular superpower-less laundromat lady tackle a multiverse makes the movie much less cliche and much more comedic. Perhaps the idea of a multiverse will always be an entertaining topic to watch, with the thoughts of “what would I be doing right now if I weren’t me” running through our mind at least once in our life.

As Evelyn crosses through these alternate universes, the director shares to the Wall Street Journal that she “realizes she has the potential to connect to any version of herself, because she is specifically the worst version of herself. At our lowest, it’s hard for anyone to avoid that thought.”

Besides the quality of the film itself, Everything Everywhere is quite literally the right movie to come out at the right time. The movie will continue to show in various theaters worldwide throughout the year, and is now available to be watched on demand through Prime Video, iTunes, Vudu and other platforms. (Text Vanya Harapan)