We say oui to Wes Anderson’s new movie ‘The French Dispatch’. The new movie might be the most star-studded Wes Anderson movie yet.

Oui oui, Wes Anderson is back! After his slightly controversial 2018 movie Isle of Dogs sparked conversations about cultural appropriation, the filmmaker is doubling down on his signature brand of whimsy with The French Dispatch, a Tati-esque anthology film that is filled with more cinematic symmetry and pastels than ever.

Inspired by The New Yorker, Dispatch follows a group of journalists who run a magazine in the fictional French town of Ennui-Sur-Blasé. The writers, lead by editor-in-chief Arthur Howitzer Jr. (Bill Murray), are compiling their best archival stories for the publication’s final issue, and the film intercuts the creation of the magazine with black-and-white depictions of three of those stories: an artist in prison, student riots, and a kidnapping. Bill Murray in The French Dispatch, 2020. Courtesy of Searchlight Pictures.

In the past few days, The French Dispatch, has already generated a lot of hype, and no wonder with a cast that includes Timothée Chalamet, Saoirse Ronan, Tilda Swinton, Bill Murray, and… well, too many other massive names to mention.

As a result, it’s pretty exciting news that a first look at the film has been revealed (February 11) in the form of an illustrated, magazine-style poster and a few still images. The poster shows an office block (housing the French outpost of the American newspaper that the plot revolves around) with a few of the aforementioned characters within. 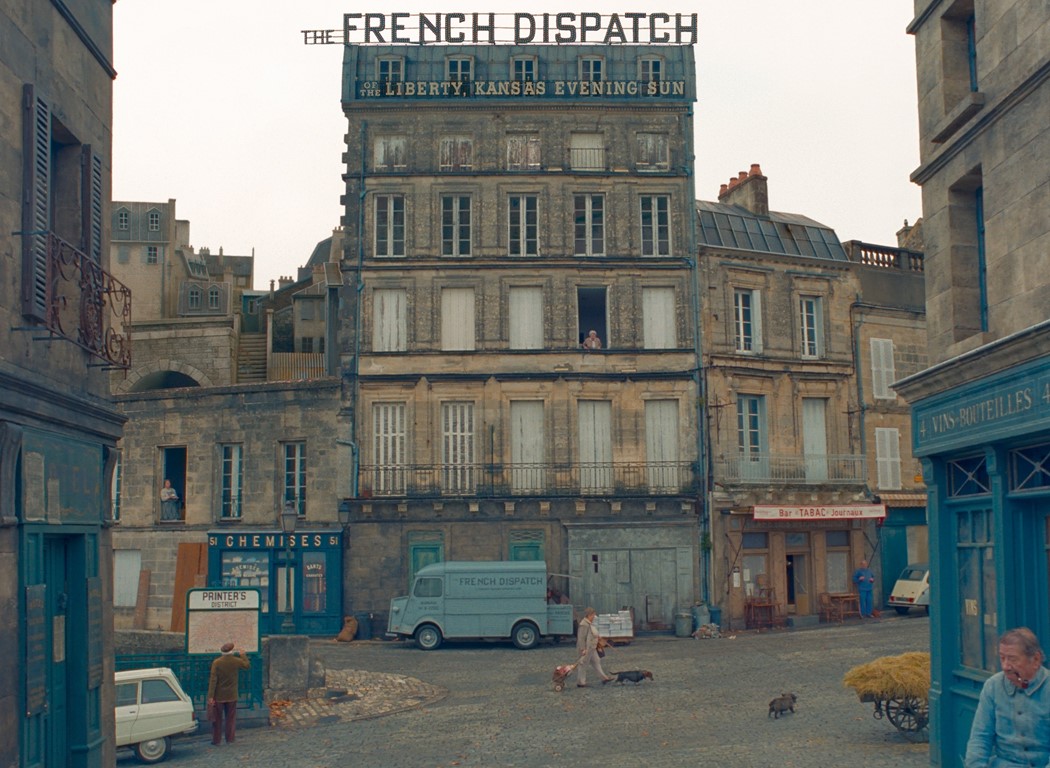 Timothée Chalamet scribbling on a notepad in the bath, Léa Seydoux looking menacing as she stands over a gun, Frances McDormand seemingly hard at work, and a paint-spattered Benicio del Toro are just a few vignettes visible through the building’s many windows. The background of the teaser, meanwhile, hints more at the action sequences we might see in the film, featuring a police chase, a hearse, and fictional French streets stalked by bloody butchers and other shady characters. 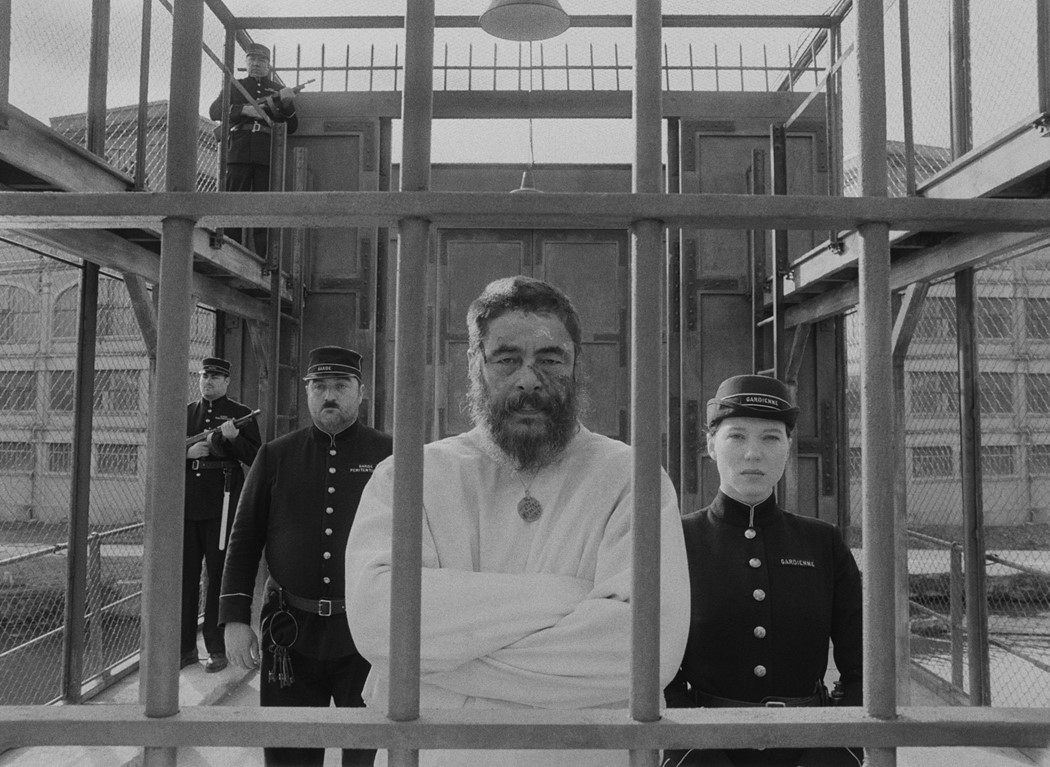 The trailer has also been published and the visuals instantly awes the viewers into obedient hipsters. As the two-minute clip continues, we are introduced to the film’s three storylines, which bring to life a collection of tales published in The French Dispatch: “The Concrete Masterpiece”, the Timothée Chalamet-starring “Revisions to a Manifesto” – which is based on the May 1968 protests in France, and features the actor in the bath – and “The Private Dining Room”. 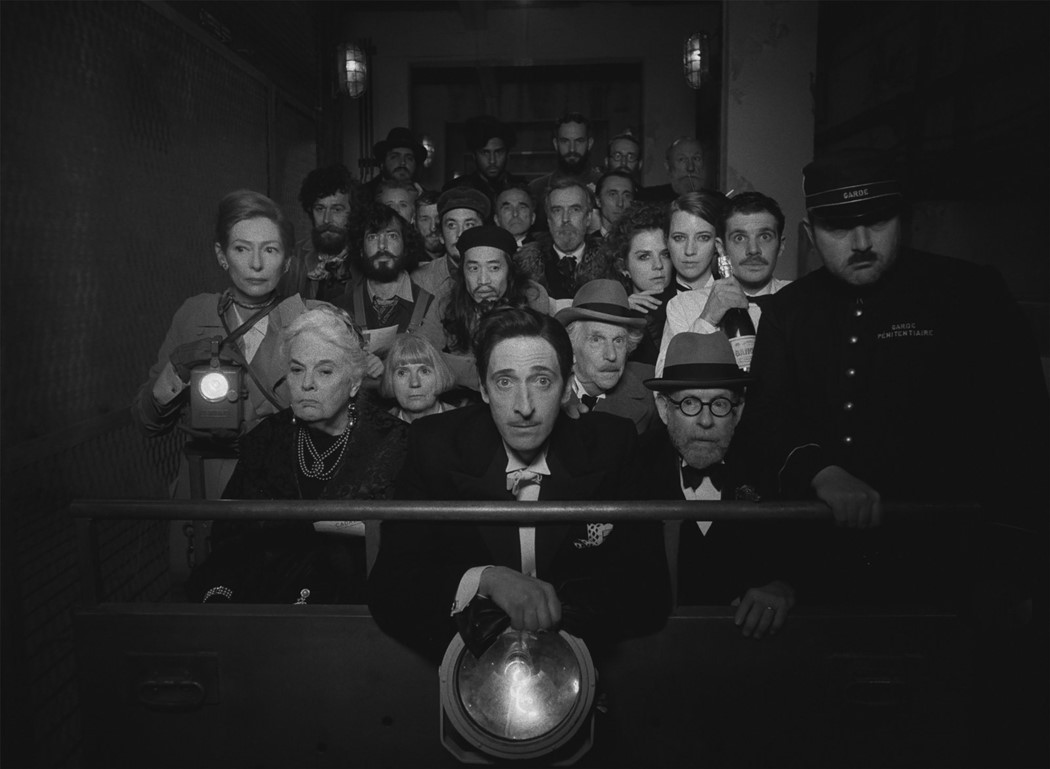 Adrien Brody and Tilda Swinton in The French Dispatch. Courtesy of Searchlight Pictures.

Searchlight has also released several stills via the New Yorker (February 11), which has been cited as an inspiration for the film itself.